A view on Climbing Island peak May 2016.  It was a pleasure meeting you and your team in Dingboche prior to my climb of Island Peak. It’s a bummer my “acquainted” friend Lisa couldn’t make the summit. I took great pleasure reading your experiences from your 8th summiting. They do reflect upon what we briefly discussed in Dingbouche.

I reached the summit successfully on 2 May and would definitely concur with your view its far from a walk in the park!

I thought to share my experience as its an interesting one. My trek guide and porter were top notch all the way whereas my climbing guide turned out to be an outright twat! There is none fitting this description better than him:) I had a long discussion with the local trekking company who was deeply apologetic about the outcome of the climb. The original climbing Sherpa got stuck at a non-disclosed event just before we were to arrive Chhukung and he proposed my guide as replacement. There was no time to make any checks so off we went. 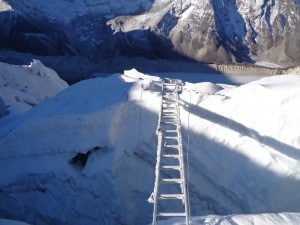 I met a young British climber who had summited 2 days before me in Chhukung and got detailed and realistic feedback on conditions on the mountain so I was mentally prepared for what I was going to find – ladders, ice/rock, difficult ropes etc. He also had a small oxy sat meter and my values in chhukung were 88% O2 sat and heart rate 69 bpm after dinner. Thus I knew that bodywise I was in a good condition.

The climb itself went really well all the way to jumar point. Basecamp was well organised, proper training and work together with ropes etc. Good meals. We opted to go straight for the summit as weather was looking to deteriorate over next few days. 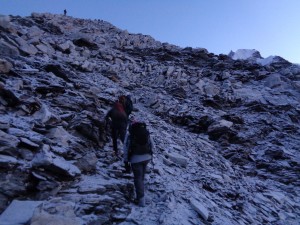 We set off 12:30 after downing a solid meal dehydrated pasta. We kept a slow and steady pace to crampon point which we reached in 3:45. We spent 45 min at crampon point as guide faffed around a bit and I took perhaps a bit longer than needed to put on gear. 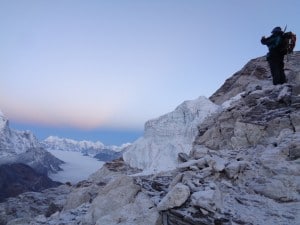 Passing the crevasses went very well and we worked good together. When reaching the wall he “couldn’t find” the ropes! Somewhat odd for a guide! So we traversed the glacier and I found them to which he said they were old. Didn’t look old to me so I said well I’ll use these. He then hooked on and disappeared up the wall leaving me behind. I thought this is even odder and kept going up. At summit ridge one crampon came undone and I had to sit down, fiddle to reaffix it before continuing. He sat 10m up and watched without lifting a finger! Somewhat annoying… 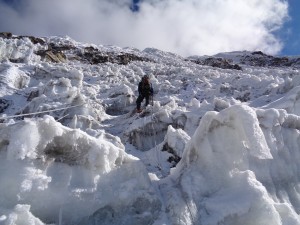 Then 20m from summit he exclaimed ‘Island Peak summit – lets take picture and go down’. I said  “What! 3 week trek and stop now! We summit”. Up we went and were first to summit. As we’re on summit 2 Aussies comes up with their climbing sherpa’s (only other people on mountain that day). There was a significant gap between them and when first one was up my guide tied in to the rope and went down. When he got to bottom of first rope he let the 2nd Aussie guy tie in to the rope and start go up. We had time to i thought fine I’ll wait few minutes and let the Ozzie guy come up – 2 people on the ropes didn’t seem a good idea. It took him 10 minutes to go the final bit! My guide then decided to keep going down and just disappeared! 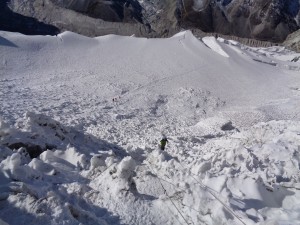 So I went down on my own which at times was hard going as I found the ropes hard to work in the figure 8. The 2 climbing sherpa’s asked where is my guide? I pointed to a small black dot down the glacier and they just shook their heads..

When I reached the bottom of the ropes and unhooked he said nothing and started to walk! He kept 50 -100m ahead of me all the way to the ladders where we had to work together. From crampon point I ignored him and walked alone to BC.

I calmly gave him some very harsh feedback when reached BC where my guide/porter waited. He just replied ‘thanks’… I didn’t stay in BC long only had soup and headed down to Chhukung.

Needless to say he didn’t get any tip and was almost offended by this!

Luckily, I had done similar climb if easier in East Tibet and could manage on my own but did find it disturbing at the time.

We spent 14 hours up and down from basecamp and in hindsight I view it as I was very lucky with weather conditions and came off with a good story.

Id be very specific of what I expect next time making a booking for a similar adventure! I also think setting own ropes will be a huge benefit and definitely worth effort/cost.

Id look forward seeing you on a trail in the future and wish you all the best.