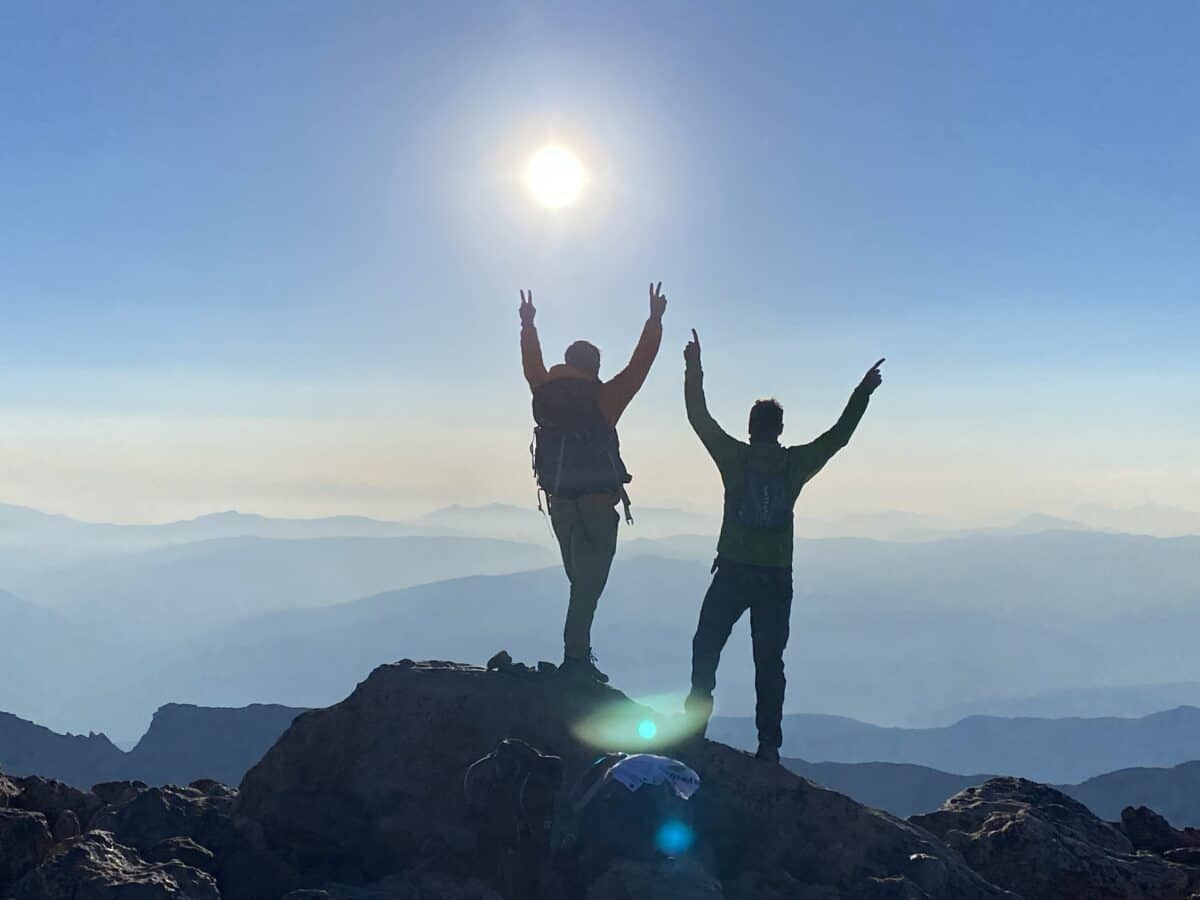 I had been training to Climb Mount Everest even though I didn’t know it. I had a lot of climbing experience and mountaineering experience but very little high altitude experience.  In October 2005, I was sitting on a bus at 4,500m/ 14,764 feet above sea level in the Peruvian Andes,  traveling with an international group.  The conversation turned into a chat about all of the adventures we would like to take at some stage in our lives.

When Dreams are Born

One of the girls on the trip, mid-twenty year old girl from England. She starting talking about how she had always wanted to climb the world’s highest mountain, Mount Everest.  My friend and I took one look at each other and started thinking how we take on Mount Everest. Our dream was born! 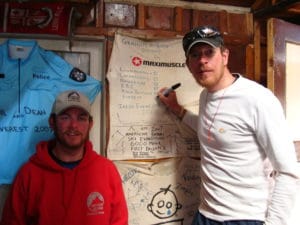 Logical Progression in Mountains You Should Climb

In my opinion there are a number of different mountains you should climb before even thinking about climbing Mount Everest.  Being as self sufficient as possible and not reliant on too much Sherpa support should be a key consideration.  We highly recommend climbing an 8,000m/ 26,000 feet peak like Cho Oyu before attempting the Everest climb.

I also believe you need to have a wide range of mountaineering experience. You should consider the following climbs before making the dangerous journey to Mount Everest. Consider climbing Kilimanjaro, Mont Blanc,  Elbrus, Mera and Island peaks, Cotopaxi and Chimborazo, Aconcagua and Denali. Putting others at risk so you can stand on the summit of Mount Everest is not cool. There are already plenty of those people on the mountain. Follow us on Instagram.

You should consider an Everest climb that limits the risk to the Climbing Sherpa’s. The more experience you have, the more you will be in a position to manage yourself and your safety. Can you can carry your own gear up the mountain? Why have someone else putting their lives at risk on the mountain for your personal endeavor. Be prepared.

We have our own office in Kathmandu with our own full time Climbing Sherpa crew. Should they be willing to take risks I am not willing to take? I personally want to limit the risk to them at all times no matter what mountain we aim to climb. 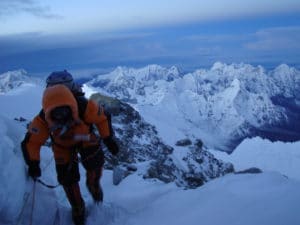 So, after our South American adventure, we returned to Ireland and decided to explore the idea of Climbing Mount Everest. We had a good level of climbing and mountaineering experience but limited experience with high altitude.  Our goal was to do this as quickly as possible, so we planned the date of May 2008.

We set out our plan to climb four mountains on four continents in one year.  As well as raising funds for charity. We would start the challenge with Mont Blanc 4,810m in June 2007, then Mount Kilimanjaro 5,895m in September 2007, Aconcagua 6,962m in January 2008 and the culmination of the climbs with Mount Everest 8,848m in May 2008. Not only were we setting an optimistic goal in our climbing, we also set the target of raising $100,000 to build the Mt. Everest Primary school in Uganda with Irish Charity Fields of Life.

We knew we were going to need help to be successful so we sought out professional advice on all fronts. This included our physical training we would need to do in order to reach our goal.  I was told that, in terms of training, I would have to follow three phases in my training; base, build and peak phases. This required different types of training than I had previously completed before I started this process, however I was willing to place my trust in my trainer and did everything he recommended. 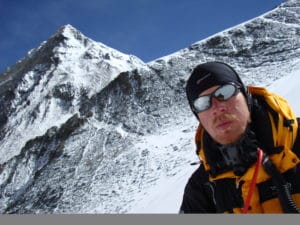 Training to Climb Mount Everest, Get a Vo2 Max Test

It was that good that he joined us climbing Kilimanjaro to get a better idea of the activity we were doing. The goal he set for me was to improve my Vo2 Max. This tests the maximum capacity of an individual’s body to transport and use oxygen during exercise. The results will reflect the physical fitness of the individual.  So, a plan was put in place to achieve at high Vo2 Max. My Max was 63 just before going to Mount Everest. Trying to increase my lung capacity to be able to take in as much oxygen as possible was one element on my training. This was mostly done in the peak phase of training. Learn more.

Base, Build, Peak Phases of Training

In January 2007, I started the base phase of training. My goal was to train six days a week with one day completely dedicated to rest.  Starting with two hours a day five days a week.  You should mix up your training. I was jogging, lifting weights, walking uphill on a treadmill and mostly stair master training. Think about adding some resistance bike work.  On the fifth day of the week, I would pack my back pack with weight. My goal was to build from 10 to 30 kilograms of weight and head out to the hills building from four to 10 hours of trekking. This was built up over 18 months. Learn more.

I also took different training trips to the Alps, Scotland and Wales practicing the specific training needed for Himalayan mountaineering.  The majority of those training trips were spent in the Scottish Highlands. I loved training on Ben Nevis and the surrounding mountains in the winter.  Sampling  the harsh conditions that Scotland can provide in the winter months will get your prepared. Scotland also provided me with all the specific technical training needed to be safe.

I could complete long hard treks as well as practice my technical winter climbing skills, all in difficult conditions. Climbing Everest is 80% mental. Having experience and lots of it would be really important. Irish and Scottish winters would help me test out my clothing and test every piece of kit. Mount Everest is also a physical challenge so being as prepared on all fronts was my goal. 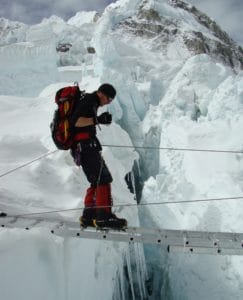 The First Peak of our Everest Challenge

After six months of hard training, and after completing the climb of Mont Blanc again in June 2007, I moved into the build phase of my training.  I added in more weight lifting sessions to my training plan. One extra hour a day in the gym taking me to three hours daily.  Also spending more hours weekly in the hills, sometimes even adding multi-day treks.  I would go out to the hills in Co. Wicklow in Ireland and trek for six to eight hours.  Set up a tent, sleep, then wake up and do it all over again. And, I was now carrying 15/ 20 kilograms in my backpack.  I also began to run some of the trails in the Wicklow Mountains, sometimes running a 9 kilometer trail three times consecutively. Mixing up the training was really important for me.

The Second Peak of our Everest Challenge

After climbing Mt. Kilimanjaro again in September 2007, we mixed up the training again, adding one interval training session per week.  I continued with the high level of intensity/ endurance training. Being comfortable building from 15 to 25 kilograms of weight to my backpack during my gym sessions was my new goal.  The added weight on my back during my gym training, combined with the increased weights I was lifting. I was beginning to really see the difference in my overall fitness levels. Every eight weeks I would take a full week off. Letting my body fully recover from the intense training was really important. After a week off, I would continue this level of training all the way until we climbed our third mountain, Aconcagua. 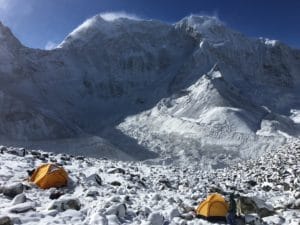 The Third Peak of our Everest Challenge

Once I returned from summiting Aconcagua in January 2008, I had two months before I would fly out to the Himalaya’s and take on the 72 day ascent of Mount Everest.  For the next those two months i was in my peak phase of training.  Maintaining a six day a week program was really important.  I would not be taking a week off until I would fly to Kathmandu. It  was important to add in interval training five days a week and would head out on the hills one day a week for eight to ten hours carrying 20kg to 30kg in my backpack.

In addition, I would also go to the gym, jog 10 kilometers and then do an hour long spin class, or interval session on the stair master or treadmill. This was my final chance to push my fitness levels through the roof.  My goal was going with confidence and knowing that I was physically capable for the climb ahead.  When you are faced with something that has so many factors you cannot control. Making sure I did everything I could to do prior to the trip gave immense mental strength. Be the best at things you can control. 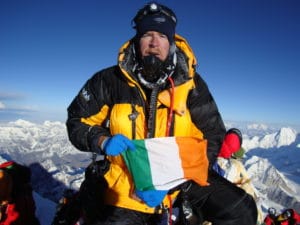 It was March 2008 and time to get the flight for Kathmandu. I was at my peak level of fitness and felt prepared for the task ahead. My resting heart rate was 38 beats per minute. I was light, lean and strong.  It would take two weeks to trek into Everest Base Camp, followed by six weeks of climbing up and down Everest, acclimatizing to the lower levels of oxygen. We would eventually climb up and down five times.

Standing on the Summit of Mount Everest

I reached the summit at 6:02 am on the 23rd of May 2008. At 29 year old, I became the youngest Irishman to stand on the top of Mount Everest. During that final seven day push to the top, I lost 12 kilos/ 26 lbs of body weight. All of the hard work I put in during my training paid off.  Reaching the summit took eight hours from Camp Four and return back in three hours thirty minutes.

Throughout the entire journey, I had to battle my own fears and sometimes I struggled mentally at times.  My physical preparation helped me push past my fears and achieve my dream of standing on top of the world. HIRE IAN TO SPEAK at your up coming event. GET IN TOUCH if you are interested in learning more specifics of my training. Why not come and trekking and climbs around the world with me.

Firstly, I hope this post on Training to Climb Mount Everest was useful.  I have led over 150 Expeditions and I have climbed 6 of the 7 summits at this stage.  Most of them numerous times. I have led 25 Island Peak climbs, 40+ treks to Everest Base Camp and Kala Patthar and aiming to climbing Kilimanjaro 50 times for charity. Currently on number 39 to date. If you would like to know more about the trips we run and how are can help you on your way to climbing Everest, get in touch.