Our friend and head climbing Sherpa Ang Kami had been leading our Island peak climbs in Nepal for many years.  Ang Kami is the nephew of Dawa our head trekking guide in Nepal he also, leads climbing trips and expeditions.   Ang kami and I had just come off Island Peak, where 7 out of 9 clients made it to the summit on 20th April 2015. Learn more about our Island Peak climbs and find out more about our support trek up to Pikey peak and visiting the village of Goli.

On the way to Goli Village

Ang Kami left us in Kathmandu early on the 25th April 2015. He was taking a bus home for the week, because he has elderly parents who needed some assistance. He would return to Kathmandu the follow week so we could head back to Everest with our next group. The earthquake happened as Kami was on the bus, people scurried for safety and he was lucky to survive. He made the long walk up to Goli village to find the village has been devastated by the earthquake.

Disaster struck Mount Everest in April 2014 and Ang Kami was in the ice fall when it happened.  The big avalanche killed sixteen Sherpa climbers on that day.  He was about 15 minutes ahead of where the avalanche hit. Anyone that knows the khumbu ice fall knows 15 minutes is right next to the avalanche. He was lucky to escape with this life on this occasion.

This remote village needs help now.  If you would like to run an event for Goli with out a doubt, it will make a big difference in the lives of local people. We will make sure the funds go directly to the village, in addition to this we will make sure 90% is spent on every project.   Please DONATE to the village of Goli if you can. Why not trek to Everest Base Camp and help raise funds for Goli Village.

Where is Goli Village

The village of Goli is 109km east of Kathmandu.  As a result, of two major earthquakes the village of Goli has been left in ruins.  The first earthquake hit at mid day on the 25th April 2015 furthermore, the second hit on the 12th May and did more damage to the village of Goli. Goli village is situated on a hill side in a remote area of Nepal. Not many tourists trek into this region but it does have a lot to offer. I can tell you the views of Mount Everest from Pikey peak above Goli has one of the best views right along the Himalayan range.

Appeal From our Head Climbing Sherpa

Ang Kami’s wife and 3 year old baby live in the village while Ang Kami helps us lead treks and climbs across Nepal. They need our help now more than ever and hope you can help us help them and their people in this amazing part of the world. Goli village has 456 homes, monastery, school, health post most of which have been damaged. They need your support, time and money to get them back on their feet. 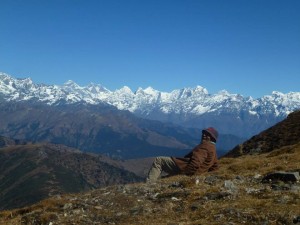 Join us Trekking to Pikey Peak

Our first project in Goli has been achieved. We have had a wide range of support from around the world along with, some private donors we have a new school. This school is a symbol for hope into the future especially, in these challenging times.  We have set up a trek to Pikey peak 4,065m/ 13,336 feet above the village of Goli. You can clearly see Mount Everest and the highest mountains in the world.

In Conclusion, you can now join a trek in Nepal that directly brings your funds to the village. There is no better way to deliver hope than in this case, of bringing support directly to where it is needed. If you want to make sure your money goes directly to the people.  Join this trek! Come and work in the village and help them get back on their feet. CLICK HERE for more information.