Kanchenjunga Circuit trekking report. Ka…BOOM!… ka BOOM, BOOM …BOOM!
I woke with a start, “what the…” My heart seemed as if it was desperately trying to
beat it way out of my chest. My fight or flight reaction was ramped up to full speed,
instantly, but I couldn’t quite yet process what was happening.

The deafening sound was like what I imagined were full railroad box cars being
dropped from a 100 story building. In a few moments, my reasoning caught up with
my panicked brain and remembered “ Oh yeah, I’m in Lohnak, Nepal, near
Kanchenjunga. That must be rock fall beyond the moraine, across the glacier. Or is it
coming from the peak directly above the little tea house we were sleeping in?” “Oh
shit, what if?” 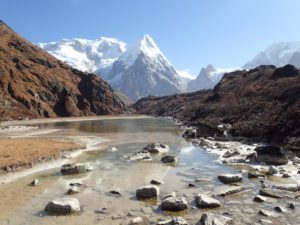 By instinct, before I could fully reason things out, I was sitting up,
rooting around for my headlamp, pulling on all of my down clothes, boots, wool hat
and big gloves. I somehow knew that it was cold, maybe -15 C, when I got up some
hours earlier to pee. The ice fog was just beginning to form then, obscuring the stars.
As I stepped over the sill and bumped my head yet again on the low doorway (you
think that I would have learned by now, having been to Nepal three times, through
hundreds of doorways, that the doors are always low) I saw that there ice fog was
even thicker, and had an elemental, lifeless, hard smell.

The visibility was extremely limited as it was still well before sunrise and the fog had settled in thicker than before. The pounding and explosive roar had not let up. In the darkness, with my heightened sense of hearing, unconsciously trying to make up for not being able to see, it seemed like some Biblical scale event.

Up on the moraine, just a few minutes walk above the little village, I could see just
the faintest outline of the crest and people with headlamps. I walked up and joined
the few Nepali guides and porters that were trying to see through the darkness and
fog across the mile wide glacier. In a few more minutes, the rock fall slowed and
stopped, then started again. We stood there silently, taking it all in.

A light snow was condensing out of the ice fog, I noticed individual flakes were collecting on the stitched seams of my down jacket. At least I could see that. After my eyes adjusted, and the first hint of dawn was coming I could see what looked like just the faintest outline of an immense dust cloud was rising dimly down the glacier. It was sort of a black on black shape, but nothing more. As we would later learn, sporadic rock fall
had been starting and stopping for 5 days, but his was the biggest event yet.

I couldn’t imagine that it was to continue like that, stopping and starting for the rest
of the day. One by one, or in pairs, we all walked back down the moraine to see if
there might be a yak dung fire started in the stove in the tea house. The unspoken
conclusion was that there was “nothing to see here, better move along”. Maybe we
could get some hot tea? This morning was the start of a remarkable day. It was one of many on that trip, a trek to the basecamps of Janu and both the north and south sides of Kanchenjunga.

Kanchenjunga is the third highest mountain in the world and sits on the far eastern
border of Nepal. A little bit of India known as Sikkim reaches up to the border with
Tibet. Kanchenjunga sits on that border. It is wonderfully remote.
It’s not an easy trek to this region. There are no tiny airstrips perched in high
valleys. You can’t cherry pick the high country with only a few days of walking. 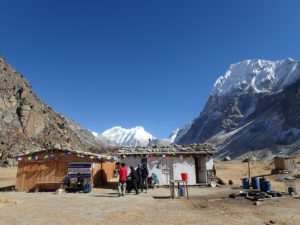 There is no wifi, cell service or even much electricity except in one village that has
its own hydro power and where people have solar panels sitting on thatched
bamboo roofs. You must first fly to a small steamy city on the border with India.
Then ride in a sweaty, tiny cramped jeep with no shocks for a day and a half over
narrow and remarkably steep, narrow, exposed, winding and broken roads to the
end.

The local driving style is to play chicken with every oncoming vehicle, as
everyone is vying for the same narrow strip of not quite so broken pavement in the
middle of the road. Tuk-tuks, motorbikes. bicycles and huge trucks are “all in” when
playing this game. It’s best not to watch, especially at night. But then, your driver
may have a mix tape of Bollywood hits playing at full volume so its great fun when
you relax your western comfort and safety standards. It’s sort of like an exotic,
uncomfortable, amusement park ride without the safety precautions… for 12 hours…

It’s much more enjoyable to walk the last 10 or 15 km as the roads are, well, still
under construction, and you can walk nearly as fast as someone would dare drive.
There are delightful riverside trails next to small farms and hamlets along the way.
We started off quite low by Nepali standards, at about 1,000m, with bamboo,
tropical hardwood trees and wildflowers growing on the steeper slopes that were
too steep to dig terraces on.

One day there were monkeys on the far side of the raging torrent that we were walking next to. The small hamlets and farms grew rice, millet and cardamom and flowers. It seemed that every home had at least some marigolds. And of course, there are goats and chickens everywhere. The chickens were always under feet, or going in and out of doorways. The smart ones get to clean up the dishes after a meal, before they are rinsed in cold water coming from a hose that comes from a creek up the hill. 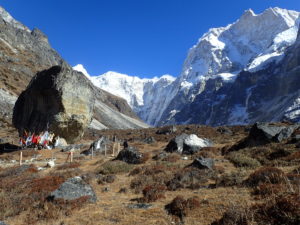 Not a calorie is ever wasted. Western hygiene standards are unknown or ignored as well. Having an “experienced” gut that has seen Asian bacteria and will be OK with that eliminates some of the potential G.I. issues. In just a two day walk, you are back two centuries, back to the way our not to distant relatives lived. Certainly, it is third world subsistence living, with all of the difficulties that that entails. The poverty is clearly there. But most people, even adults out on the trail, still greet you with a smile and a hearty “Namaste”. Some may even want to talk for a while. “What is you land?” Or, in the higher regions, “Tashi Delek”, which is the Tibetan greeting.

To me that is one of the best parts of travel, the little person to person interactions, if only for a few minutes, were some the high points of the trip. There is little in the way of tourist infrastructure in this region. Most of the little lodges are very simple, more like sheds converted from storage areas. They are sometimes described as being almost comically crude. There may be bed bugs in the lower elevations and there will be mice. The menu selections are, well, limited. You must like dhal bhat, and be willing to enjoy it at least once a day. Our saying was: “Dhal bhat power, 24 hour.” But isn’t that all part of the charm?

In three weeks out small group saw only 50 or 60 other westerners. We saw only
two large groups, marching in very tedious looking lines. I felt sorry for them.
Would they be able to stop at a tiny trail side shed for some sweet tea flavored with
nak (female Yak) milk, and chat with the owner? Or do some bouldering at the base
of Janu? Doubtful.

Many or most of the other couples or pairs we met have been to Nepal a dozen or more times. Pretty much all of them were seeking a more authentic trekking experience. One certainly does that in villages where the average 10 year old has never seen a car but wants to chat. Or you learn that the tea house owners wife and sister just delivered their 16 year old married daughters first child the week before. Authentic.

And then there are the trails. They are not built or maintained for western trekkers,
but are rough, broken down, eroded and often remarkably exposed. We estimated
that 20% of the 150 + km that we walked would result in a fatality if one fell. Some
of the valley bottom ones were particularly scary as we were on recently eroded,
loose sand slopes just a few meters above raging class 5 whitewater. Some were just
a series of little steps kicked into the sand. If you were on a climb up high
somewhere you would want a belay. 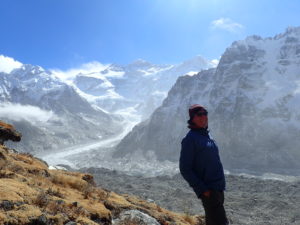 The trail from Lhonak up the north side of Kanchenjunga is mostly up a gentle grade
with wide open views. There was one ridiculously steep sand climb 500m up
around an immense Himalayan sized landslide. As we walked up that morning after
tea, tsampa porridge and an omelet the rock fall continued sporadically. The ice fog
gradually dissipated and we saw a large heard of blue sheep.

Very distant relatives of THE blue sheep of Peter Matheson’s book “The Snow Leopard”. The light that morning had the most ethereal quality, of things hidden and slowly revealed. After nearly two weeks of travel we were there. The north side is truly an amazing place. There must be over 3,000 meters of vertical relief there, with two hanging glaciers, one above the other. It’s all so big that there is simply no sense of scale. Is that a 100m serac, or maybe 250? After another meal of dhal bhat, a few of us walked up higher to see some more sheep andan even better view of the north face. Kanchenjunga is the star of the show, but Wedge, Nepal and Pyramid peaks are stunning as well. The clouds were starting tobuild as they did each afternoon and it was time to head back.
The clouds rolled in with a bitter headwind and some snow. By the time we got back
to Lhonak , we were completely socked in again. Shortly thereafter, it was cold and
dark. The rock fall continued, sporadically, unabated, as it had all day. The Mountain was still angry.