My long time friend, Frank and I have some history together. Frank and I were skydiving champs and had some time in the paratroopers. We have also been trekking together for many years.  We started researching Island Peak, setting our target for 2019. Here is My Experience Climbing Island Peak with two Different Companies

We made our own acclimatization plan, contacted our guide from previous trips and he said the company he worked for could organize it for us.  So we went, arrived in Kathmandu, flew to Lukla and we went up and down on our way to Chukhung.

Months before our departure we sent our itinerary, mailed about high camp, about three days for eventual weather holds, and a second (or even a third) summit attempt.
We made it clear, the main objective of that trip would be to summit Island Peak and the whole trip was only done for that. 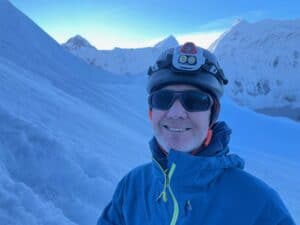 What About our Island Peak Summit Attempt

Before we left Europe and in Kathmandu, we kept asking questions about our itinerary and about the camps. The answers were no worries, it is was all taken care of, they said.
Lukla, same story. “That’s how it goes in Nepal, don’t worry!” Phortse, Pangboche, still no climbing guide, no confirmation of our three days summit window.

We accepted it. Actually, we gave up on our quest for more info, there was never a reply that answered the question anyhow. After more than two weeks trekking, up and down along the route, we arrived in Dingboche, all above 90% oxygen saturation, in great shape.

The Guides Shows Up

Here we would meet our climbing guide. Well, he came to the teahouse one evening. He looked at our gear for 10 minutes, (we brought it all from Belgium, except one of us) said it was all ok, and he went again.

We, were actually a group of four. Because, when we started planning Frank’s daughter would join and a neighbor of Frank came along as well. That the ‘neighbor’ didn’t have climbing boots, nor crampons, was of no importance to the climbing guide. We would sort that out later. 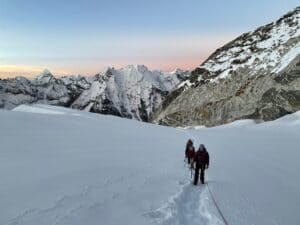 We Will Sort That Later

While we drank tea in the guesthouse in Chukhung, we saw another Island Peak group practice ladder crossings, roped up walking, jumar and figure of 8 work.  We spoke with the “Ian Taylor Trekking group” and they said they would postpone their attempt
because of a snowstorm that was announced.

We hiked up to Island Peak Base Camp, with some plastic mountaineering boots for the neighbor. In the afternoon, in basecamp, the climbing guide came to the dining tent, he said we had to meet up in 15 minutes for training. He introduced two Australian girls to us, Bec and Mimi, they would join us on our training. 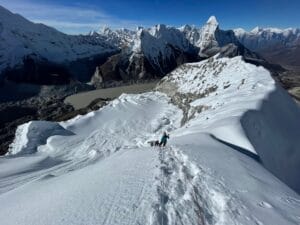 We walked up a hill, using the jumar, came down that same slope, using the figure 8, and that was it. The six of us looked at each other with big eyes and said: “Well, it is a hiking peak, right?” Bec and Mimi would also be our climbing partners on our summit attempt, said the guide. There would be another climbing guide but we would meet him at midnight.

I said we wanted to cancel that night’s summit push, the snow accumulated in base camp, what would that be higher up?  The climbing guide said the weather was not going to be a problem.  We left base camp at midnight. Oh yes, the idea of high camp was waived in Dingbouche because there was no water available in high camp. (We wanted to go via high camp). 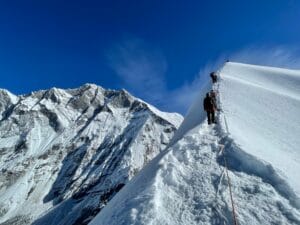 Snow hindered our ascent to crampon point 5,900m/ 19,356 feet. It took us until 8am, a total of 8 hours to reach crampon point! But when we got there, it was clear again.
Crampons on, roped up and over the glacier we go. We never trained that, of course.

We arrived at the first ladder, that had shifted during the overnight snowstorm. Our climbing guide yelled at the group to send their climbing guide so they could fix the ladder. It took them more than an hour. We know, mountaineering is full of unexpected things so we saw the challenge.

I mentioned, it was well past 9am, it might be smarter to break off this attempt and try again in 24 hours, we discussed the matter between us six, we agreed
The guide didn’t understand my remark, or acted as if he didn’t understand it.

Same story was told to the other groups and we all descended back to Base Camp.
Once in Base Camp, I proposed to the guide we would descend to Chukhung and spend the night there. We could re-group and make another summit attempt the next day.

We had three days foreseen in our program. But the climbing guide said it was not possible since there would be no space in Base Camp. He had no time because he had another group, more blabla. The result was there was not going to be another summit push. Our two days extra, reserve days for the summit, turned out to be useless. 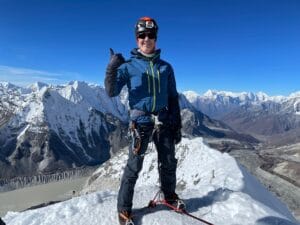 They went the next day and all summited, we saw on Instagram, while we were on our way down to Namche. We really felt like we never got a fair chance for a serious summit attempt.

Island Peak was still an open ended for me and I can’t live with open ended goals.
My friend Frank, his daughter and the neighbor lost interest, I didn’t.  I contacted Ian, he was the only one working with high camp (something we wanted on our first trip)

We did some serious practice before heading up to Island Peak Base Camp, and he had a great success rate on Island Peak.  I got into the team Ian was leading for the spring of 2021…..more covid. In October  2021 we went. Quarantine or no quarantine, I’m going!

I met up with the whole team in Kathmandu, fellow climbers, climbing Sherpas, and the expedition leader.  We sat in a room and discussed and talked and laughed about our quarantine, about walking up stairs in the hotel and about our histories. Then, suddenly, quarantine was lifted, we had four extra days, we added a mountain, Lobuche
East. Why not? 😉

We flew to Lukla, trekked to EBC and Kala Patthar, guided by the same Sherpas that would climb with us on Island Peak.

Did I say already that the Sherpa team totaled over 20 Everest summits? Experts! In Chukhung we practiced; a full afternoon, ladders, jumar, figure of eight. We moved up to Island Peak Base Camp and did more practice. We got natural in rope work and started feeling comfortable with our gear.

While we were there the back office gave weather updates and well planned we moved up to high camp for our summit push. We woke up at midnight, got soups,2 liters of water and we started moving, with confidence. The Sherpas knew who was strong and importantly knew us.

We all summitted shortly after sunrise, with clear blue skies. Had a party on the summit, came back down, packed up high camp and partied again in Chukhung.

The Colorado office had it confirmed, don’t delay your Lobuche summit attempt.
Lobuche East base camp one day later, high camp the next day and summited a second 6000 meter peak within three days from our first one. What a team! A team party, with cake, and a few shots, in Namche! 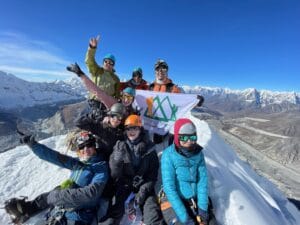 If you want to give yourself a fair chance of success, go for the professionals, go for Ian Taylor trekking. Ian Taylor Trekking has a great acclimatization plan.  We had a great plan on the first trip but we could not execute.

With Ian Taylor Trekking you work with a team, a team of climbers but that team also has the climbing guides with you from the start in Kathmandu!  It was very clear to me, Island Peak is no trekking peak.  It is hard, challenging and a real climbing peak that
has to be treated with respect.

Having a quick meet up in Dingboche with your guide is not the way to go.  Island Peak should be managed with a team, a team that trusts each other, Sherpas trust climbers and the other way around.

Starting from Base Camp is for the the strongest climbers. Not having the extra hike up from Base Camp but safety and success at a premium. The long hike before the climb starts, was not the way to go.

Since we had extra days planned for the summit and we could go on the first day, we had an extra peak on that trip and climbed also Lobuche East on this trip. We were there, we were well bonded, our climbing guides were willing and the expedition leader could get it organized. Yihaa! Two 6000+ summits in one trip.

PS: Lobuche East is an even tougher cookie. It consist of a longer summit push, with longer ascents, with more difficult rock scrambling before crampon point, and a surprise rock wall that may have been new for this year? Ian Taylor Trekking had his own ropes on this one too. The group that started their summit push behind us, relying on the ‘public’ ropes, never made it, the ropes simply weren’t there.