The climbing season on Aconcagua starts in November and continues until the middle of beginning of March each year. In reality there is no set weather window. You could aim to summit on the 1st of February every year and the weather will be different every year. You might find better weather in February than December or January. The key is to have more available days for your summit attempt. Having the correct acclimatization along with spare summit days it really important. Read some reviews from our trips. 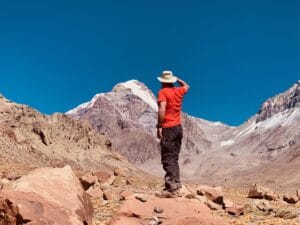 You will hear people talking about mid December and mid January being the best weather window and this really is,  this is not the case. I can tell you one thing that a lot of people crowd the mountain at this time and makes it more dangerous. A lot of people flock to the mountain at this time so they can maximize annual leave from work. In saying this, December and January are great months for climbing Aconcagua. We recommend climbing when there are less people. 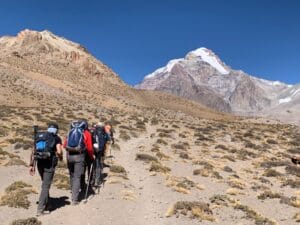 There have been years where it has been impossible to reach the summit in December and January on specific trips. A good few times I have been there in February and standing on the summit with liner gloves and fleece. This year one of our teams reached the summit on the 28th February. There was no wind and it was 37 Fahrenheit/ 3 Celsius on the summit. 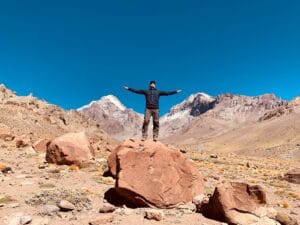 There can be challenges gaining access to water high on Aconcagua. The Vacas Valley Traverse Route has better access to water than the normal route later in the season and all the way into February.

Snow disappears off Aconcagua very quickly even after a big snow fall. The wind and sun do not help. Ice is melting very quickly on Aconcagua. The difference in the past 15  years of going to this mountain is immense. Sometimes we have to carry extra water from Camp 2 to Camp 3 before the team can move into a position to make the summit attempt.  It is normal to see big snow falls disappear within a matter of weeks on the mountain. By the time we come to February and March the mountain can be complete bare of snow. 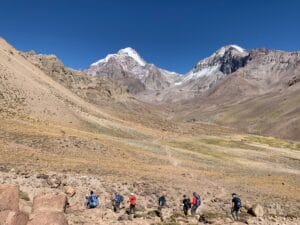 When are There less people on Aconcagua

Choosing the right month for your Aconcagua expedition need some consideration. You also need to consider the number of people on the mountain and the permit cost. The largest number of mountain climbers will be on the mountain in December and January. Most of those climbers will join via the normal route via Plaza de Mulas Base Camp.  If you don’t want to climb surrounded by crowds of climbers, try to avoid arriving mid December to mid January. We recommend the Vacas Valley traverse to avoid crowds. 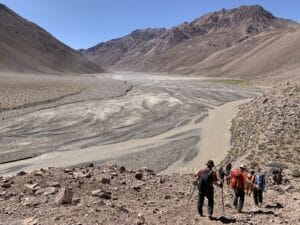 Permits and the Right Month

Firstly, high season permits are more expense and something to consider. The cost of permits has risen significantly over the years. We used to pay USD $250 per person the main season. Now, at the same time the permit can be USD $950 depending on the exchange rate at the time you go. Off season permit is around USD $730.

In 2020 the off season permit cost our clients USD $630 per person with the exchange rate.  The challenge with permitting is that there maybe be no more high season and no low season. Be prepared for permitting, costs so change at any time.

We have access to the best permit rates and we have a staff member manage all logistics around permits. You just need to show your Helicopter evacuation cover and card and bring the permit fee in cash and we will do the rest. 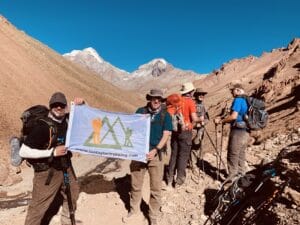 Before deciding the month you want to go to Aconcagua contact us and we can chat with you. We only run quality run trips working with a great locate team to provide the highest level of safety. We look forward to helping you reach your goal of standing on the highest mountain in South America.