It is an honor for me to write about my trek to Everest. I had first reached out to Ian Taylor Trekking in 2016 as I really wanted to trek in the Everest region in 2017.  Ian encouraged me to do the 5 day Inca Trail and see how I would adapt to the lack of oxygen and cope with multi-day trekking. I have run half marathons in the past but never been on a trekking adventure and wanted to be safe and successful.

Looking back on this journey, it was important for me to start will a lower altitude trek and build up to the Everest trip. I had no idea what I was getting myself into. I was not familiar with carrying a backpack.  Also, I had not done a lot of trekking or walking for hours on end. I definitely learned that I was not as strong as I though I was.

I have to admit, from what I had read on the internet before I found Ian Taylor Trekking was that the Everest trek was going to be easy. It certainly was not. The trek might be easy for those who trek all the time, who are always hiking/wearing a backpack, are active, but from my experience on the trail most people were like me. Thinking that they were fitter than they actually are. The uneven trail, stairs, steps and long days on your feet require strength and specific trekking, walking and training. Don’t under estimate the altitude and the lack of oxygen.

I didn’t really pay as much attention to the training as I should and learned my lesson on the Inca Trail to Macchu Picchu. Throughout the trip, I really struggled with the steps, daily distances and altitude, and I struggled every day. I missed some of the main Incan Sites because I was so slow and my legs were sore.  On a separate note, Peru is amazing. Machu Picchu is very special and the service and set up on the Inca trail was second to none. This was a life changing experience for me.

I applied what I learned on the Inca Trail and started training each day with weighted backpack, as Ian suggested. Building strength and endurance by walking up hill on the stair master. Because I live at sea level, I really had to figure out how to build the right leg strength and how to train harder, at higher heart rates to be able to perform longer when on the trek. This was critical, talk to Ian he will explain what you need to be doing and listen to him. I did underestimate the training needed to be comfortable, safe and enjoy the trek.

Building up my Training in Preparation for Everest

I decided to give myself 6 months to prepare. After the Inca Trail trip, I kept training 3 days a week and then started ramping up the amount of days to 4 and 5 and sometimes 6 days a week. I tried to build up to 1:30 minutes at 140 heart rate with a weighted back pack. I am also 52 years old! Then once a week I would train for 2/3 hours with weight at 120/130 heart rate, taking a break each hour.

My Journey to Mount Everest

I had put in the months of preparation, dedication and hard training. Hopefully I would have what it takes to make it to Everest and Kala Phattar, and then have the legs to make it all the way back down again. I found my way to Kathmandu and was excited to be there. Once I exited the airport, I was greeted by one of Ian’s staff and brought to the Yatri hotel.  It was a nice hotel in the tourist district of Kathmandu. Coming from the states I wanted to take a few days to relax and recover from the long flight. I did some sightseeing around Kathmandu, which was well worth the extra few days if you can spare them.

The staff on the ground were great. Dawa, Sonam, Kay and others helped me at every turn while I was in the city. I had feared the flight into Lukla but it was really straight forward and the views were nothing short of spectacular. 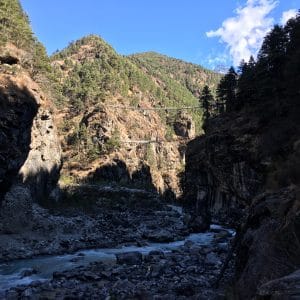 The Terrain and Trek to Everest

The trek and terrain to Everest was challenging under foot. The trails are uneven, steep and require you to have excellent leg strength. The pace our guides set was perfect, slow and steady was key to success, but you have to be prepared. Some of our group wanted to go faster but the guides explained the need to go slow in the beginning. It was, and is so important in recovery and easing your way into altitude. It was so important to have the additional time in Namche. Three nights was a welcome break for some as we gave our bodies a chance to give the best acclimatization. I really enjoyed having the additional nights here on the way up. 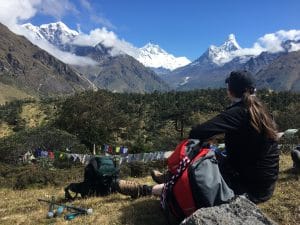 The hills, trails and trek are full of hills. You are either walking uphill or downhill, so you do need to be physically prepared. Most of the trail is uneven and hard under foot. It was very different from the Inca Trail. I was so glad I trained with the weighted backpack. My legs were sore on the Inca Trail on this trek my legs were rock solid, which gave me a lot of confidence. I had no problem with the two hour hills up to Namche and Tengbouche. Ian talked to me about coming with leg strength and endurance and he was 150% right. You need hours of training in the leg. Do not underestimate this. 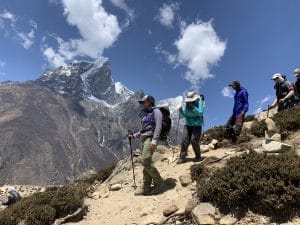 Trekking High up in the Everest Region

In terms of the journey to Everest, it is much easier if you come prepared. It was always important to move slowly. I never had a headache at any stage of the trip. As expected, I had some altitude related stomach issues. As we moved to Lobuche, Gorak Shep and Everest Base Camp, the lack of oxygen was noticeable. The lack of oxygen on Kala Patthar was really noticeable. However, all of the long hours of training paid off, as my legs and overall physical conditioning helped me cope so much better. Kala Patthar is not easy but doable, just come prepared. 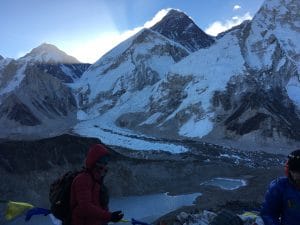 Our whole team made it into Everest Base Camp but only 6 out of 10 made it up Kala Patthar and I felt sorry for them as this was one of the best mountain viewing days of the whole trip. You need to go up Kala Patthar if you are feeling up to it. 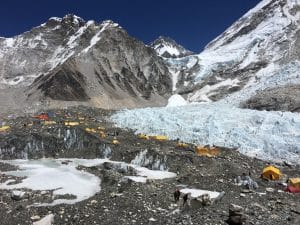 It was noticeably much harder to move between 16,000 and 18,500 feet.  Hiking at 10,000 feet was no big deal compared to hiking at this very high altitude. Once again, the physical training and preparation paid dividends. You much train for this trip to enjoy it. I don’t care what you read on the internet.

The Service, Team and Advice from Ian Taylor Trekking

The service, set up and number of guides we had compared to other groups was exceptional. From the moment I was in touch with Ian, his advice, passion and wealth of information was priceless. His office team in the US and Nepal were truly amazing and always available to help me in my journey to achieve this dream. A remarkable group of people I hope to climb Kilimanjaro with Ian himself in 2020 and take on another challenge. The journey so far has been life changing and I mean that. 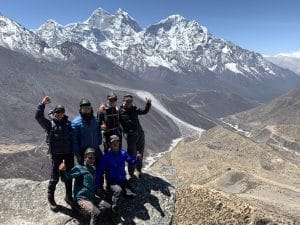