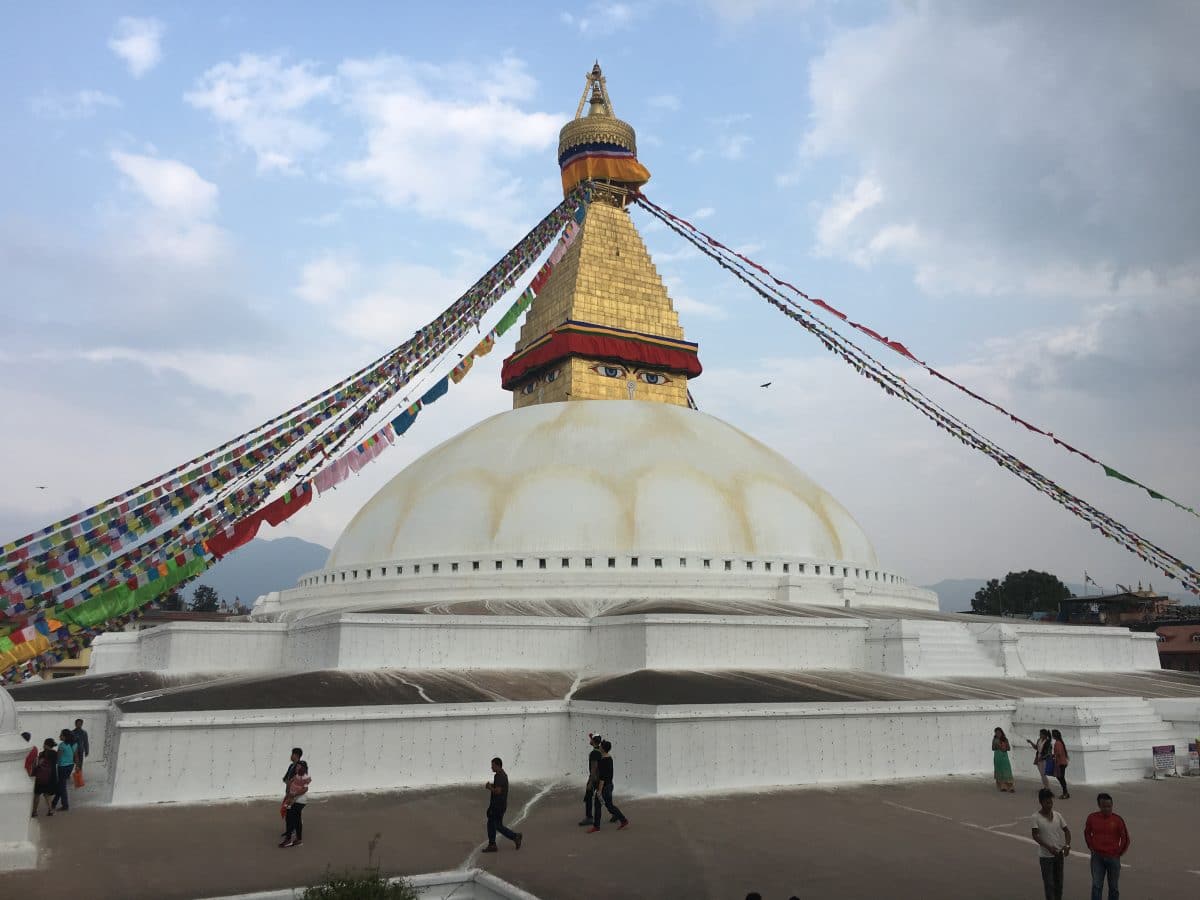 Top 10 Things to do While you are in Kathmandu. We highly recommend arriving to Kathmandu a day or two early if you have a Himalayan trip planned.  Depending on where you are coming from, it can be quite a long journey to get to Nepal.  Jet lag is no joke, and we always want to have some time to recover from the journey.

Start Relaxed for Your Visit

It is important to re-hydrate and get using to living in a new time zone and build up you immune system before heading on your trekking or mountaineering adventure. If you need further information on our trips just CONTACT US for specific information you are looking for.

Boudhanath (or Boudha) Stupa is the largest Buddhist Stupa in Nepal.  It is truly a fascinating site, as well as the religious center for Buddhists in Kathmandu. The Stupa is surrounded by houses, shops, cafes and monasteries and truly a beautiful site to see. It is also a wonderful place to spend time watching pilgrims from all over the world circumnavigating the site, saying their prayers and spinning their prayer wheels. The Stupa was thought to have been built in the 5th century, was destroyed in the 14th century and rebuilt again. It was also badly affected by the earthquake of 2015, but has been restored.

Boudha is set on concentric ascending terraces in the powerful pattern of a Mandala. The 36 meter-high Stupa of Bouddhanath is one of the largest Stupas in South Asia. Bouddhanath Stupa was renovated by Licchavi rulers in the eighth century. The Mandala design in Boudhanath Stupa is a copy of the one in Gyangtse in Tibet. 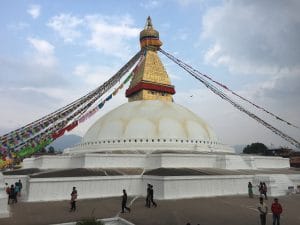 Swayambhunath Stupa (also known as the Monkey Temple) is the most ancient and enigmatic of all the holy shrines in the Kathmandu Valley. Its position atop a hill means it can be seen for miles around, and because of this, is a great view point for the city itself. A stone inscription is evidence of the importance of the Stupa as a Buddhist pilgrimage site from the 5th century. It is visited by Hindus, Vajrayana Buddhists of Northern Nepal and Tibet and Newari Buddhists of central and southern Nepal. Each morning before Dawn hundreds of pilgrims climb the 365 steps before circumnavigating the Stupa. 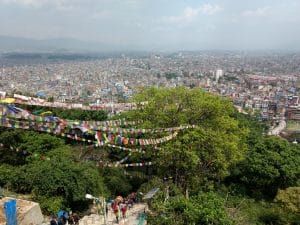 The Pashpatinath complex is the largest and most important Hindu Temple in Nepal. The temple is dedicated to Lord Shiva. The architecture is incredible and though non Hindus cannot visit the temple itself, they are allowed in the complex. This is the cremation ghats of the Hindus of Kathmandu. It is an interesting place to visit for historical, cultural and religious reasons, but remember there are families mourning the loss of loved ones and you should be respectful of this at all times.

Kathmandu Durbar Square (Palace Square) was where the city kings were crowned, legitimized and ruled. It is one of three Durbar Squares in the Kathmandu Valley. As such, it was and still is the heart of the old town and Kathmandu’s most spectacular legacy of traditional architecture. Many buildings and temples date back to 17th and 18th centuries, many are much older.  Many towers and temples collapsed during the 1934 and 2015 Earthquakes, and the square was seriously damaged. It continues to undergo restoration at this time but remains a very interesting place to visit. 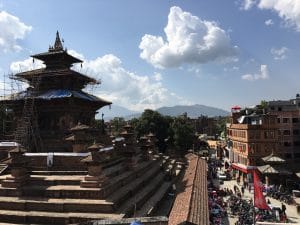 At the center of the city of Lalitpur, you will find Patan Durbar Square. It is one of the three Durbar Squares in the Kathmandu Valley, all of which are UNESCO World Heritage Sites. One of its attractions is the ancient royal palace where the Malla Kings of Lalitpur resided. There are other temples in the square and in addition to this, the surrounding area has more temples and Stupas. The museum is also very much worth a visit. There are shops, art galleries, cafes and restaurants which make the area a fun day out. It received serious damage during the 2015 earthquake and is presently under reconstruction, however still a beautiful stop on your travels.

The Bhaktapur Durbar Square is located in the beautiful Newari town of Bhaktapur.  There are 4 squares to visit, all of which are interesting. It was badly damaged in the 2015 earthquake, and is undergoing restoration, but this should not stop you visiting. The palace, stunning golden gates, royal baths and temples are incredible. The whole area is full of narrow streets and quirky buildings. There is wood carving, pottery, arts and crafts for sale in many of the little shops and by the street vendors.

If you have time after visiting Bhaktapur, a short visit to this beautiful temple is also a must. Though it is absolutely worth a visit in its own right. In order to get there, a short walk from the car park takes you through the village.  The village is topped by the beautiful Changunarayan Temple Complex. The town also boasts museums and shops, for you to visit as well. The oldest temple of Nepal is considered to be the Vishnu Temple of Changu Narayan. In the main temple itself, the stone carvings date back to the 7th century and along with the woodcarvings are a sight to behold.

Namobhouda is a very important Buddhist pilgrimage site.  It lies about 38km from Kathmandu in the district of Kavre. The Stupa and shrines built in this lovely little hill mark a very ancient holy site which signifies the place where a legendary prince named Mahasattva offered himself to a starving tigress with several underfed cubs. Consequently, this story of Mahasattva is depicted on stone slab, right next to a holy Stupa.

The Kailashnath Mahadev Statue is the world’s tallest Shiva statue. Likewise, is second tallest Hindu deity after Garuda Wisnu Kencana Statue in Bali, Indonesia. The statue is on the border of the Bhaktapur and Kavrepalanchwok districts, in Sanga. Which is about 20 km from Kathmandu. From various points around the valley you can see this beautiful statue.  You can also enjoy the beautiful views from the site.

You can wonder the back streets of Kathmandu and find your way to gondola lift transportation system located in Chandragiri Municipality. This cable car opened in 2016, the Chandragiri Cable Car runs from Thankot to Chandragiri hills. The 2.4km 9,095 feet line has two stations. The cable car system consists of 38 gondolas that can carry 1,000 people per hour. On a clear day it offers some great views of the Kathmandu Valley and Himalayan mountains surrounding Kathmandu. Especially if you can get clear skies! 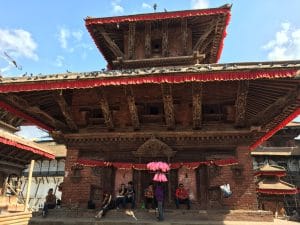 We arrange day tours, multi-day tours in and around the Kathmandu valley. CONTACT US for further information and we can organize a tour around this historic city for you along with your trekking or climbing adventure!

We have been traveling to Kathmandu since the early 2000’s. Ian has personally climbed Mount Everest and led over 35+ treks to Everest Base Camp.  He has climbed Island peak over 17 times and led treks in the Annapurna region and other destinations around the Himalayas.  Nepal has so much to offer and we love visiting Pokhara and surrounding area as often as possible. We find Pokhara to be one of the most relaxing places to visit, however Kathmandu is filled with many exciting sites to visit. Follow us on Instagram.