We spent years building our mountaineering experience. 18 months of serious training preparing to climb Mount Everest and 8 weeks in the Everest region leading up to this summit night on Mount Everest. It all comes down to one night. 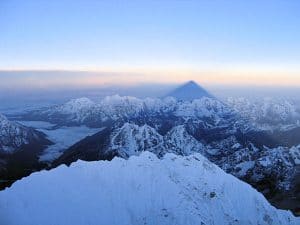 Sitting at Camp 4 on Mount Everest

We are sitting in the tent at 7,950m/ 26,000 feet at camp 4 high on Mount Everest.  Someone comes to tell my climbing partner and I that a Swiss climber has died in the next tent to us, furthermore we would have to step over a body at the Balcony at 8,400m/ 27,560 feet. We are about to enter the higher realm of the Death Zone above 8,000m/ 26,247 feet on Mount Everest. Facing the fact that two fellow climbers had died was not easy. Knowing that we would actually step over a body at some stage on the climb was hard to digest.

We had spent the two years preparing physically and mentally for this challenge along with eight weeks living in the Himalayas. The Everest challenge requires that you climb high and sleep low. We had to slowly move to Camp 1, then return to Everest Base Camp. We would climb to Camp 2, then return to Base Camp and so on.  There were two key functions to this, acclimatizing to the low levels of oxygen. The second was to move our equipment up the mountain. 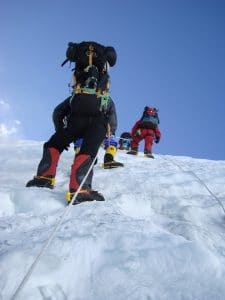 Feeling the Effects of Extreme Altitude

You could feel the stress in the tent, not to mention the effects of the lack of oxygen. The last eight weeks we have spent climbing on Everest had been challenging. My climbing partner Graham has some additional pain, after returning home, he found that he has cracked two ribs from coughing, due to the famous Khumbu Cough.  Many climbers experience the Khumbu cough as a result of the dry air on the World’s highest mountain. Little did he know that this harsh cough he has developed will eventually force him to abandon his dreams of standing on the top of the world. 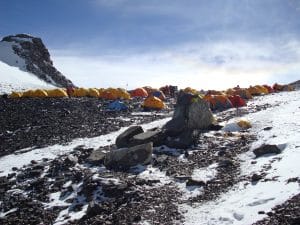 Contemplating on the Journey Ahead

It is the 22nd May 2008, and we have 10 hours sitting and resting in camp four. Those 10 hours felt like a lifetime.  We were trying to eat and drink whatever our stomachs could handle. I remember forcing in water, hot chocolate, nuts, chocolate, and sweets. Trying to remain mentally focused at this elevation is quite challenging.  Thoughts come and go while I lay in the tent thinking about the next 24 hours of my life. The was hard to believe the last 3 years had come down to this day.

Our personal goal was to climb four mountains on four continents in one year. The bigger goal was raise enough money to build the Mount Everest Primary school.  I had failed at many things throughout my life and this was my chance to do something big. I needed to prove my personal self worth, moreover reaching the summit would eventually help others. All of these factors motivated me to keeping moving and push for the top. 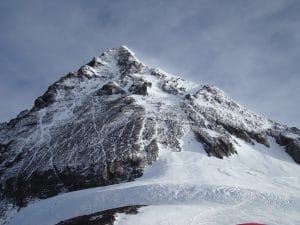 About to Enter the Death Zone

We set out that night at 10 pm, walking across Everest’s South Col in the dark. I was accompanied by my Sherpa, Pemba Chirri, who climbed behind me, driving me forward. It was – 20 degrees Celsius, coupled with a light winds and the dark. It was time to start our journey up the first leg of the summit push to the Balcony at 8,400m.  Each step was very difficult, and catching your breath at these altitudes can seem impossible at times.  I was using supplemental oxygen, which increases oxygen flow by 2%. The canister of oxygen is a mixture of compressed gas and ambient air. The compressed gas is keeping you alive, not improving your ability to climb. 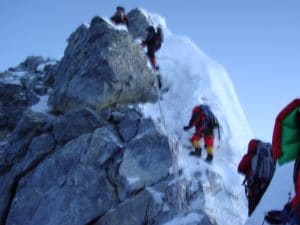 When you are put under pressure, and in a dangerous environment you can drift to negative town.  It becomes very important to block any negative thoughts and stay positive. Controlling my breathing and heart rate were critical.  My key focus was staying in the moment, maintaining focus on each step.  It was important to use the right ropes, pace myself and keeping my heart rate at a level that I could maintain. I was using only enough energy to safely make the summit and return back down safely. 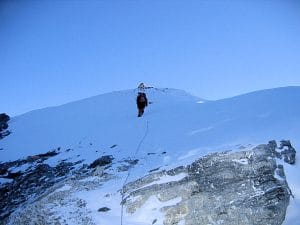 Moving Closer to the Balcony

All I could think about on the way up to the balcony was, when I would have to step over that body. How was I going to do it. Would we make eye contact. This was such a horrible thing to experience. I then started thinking about the last three Irish people who tried to climb Everest in recent years. They all nearly lost their lives high on this mountain.  This was the time to remain focused.  keep to the routine of taking three steps and then ten breaths, again and again. The best climbers are the ones who remain focused, calm and relaxed in the challenging moments and keep going.
Beyond the Balcony, the wind started to pick up and we were stopped in our tracks.  As the wind was swirling snow up in my face I had to decide to keep moving.  I was using my hands to cover my eyes and face as the wind was strong. At that point I wanted to turn around; I was thinking about the storm on Everest in 1996. Eleven people died when high winds hit the upper part of the mountain.  I really didn’t want to get caught out, high on this mountain. 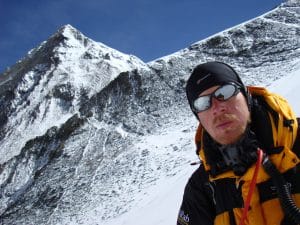 Moving Towards the South Summit

The wind died down just enough to help me make the decision to move forward.  I could see electrical storms below me in China and hope the clouds would stay where they were. There were around six head torches above me and wanted so much to get closer to the climbers above. I knew Martin, a Scottish climber, was ahead of me and wanted to get up to where he was to relieve the feelings of being alone on the mountain. Every step was hard work, hour after hour, step by step, pushing slowly forward.
About three hours later, I reached the South Summit of Everest and sat alone in the dark, sipping some water. I was tired, my left leg and my back were sore. There was a dim light on the horizon as I start moving again.  I stepped off the back of the South Summit of Everest and there was a climber standing close to a 10,000 foot drop, on a section known as the knife edge ridge. This section of the summit ridge has killed more than thirty climbers over the years. The Sherpa behind me began to shout stop, stop’ and the climber yelled back -it’s Martin, I,m Blind’. 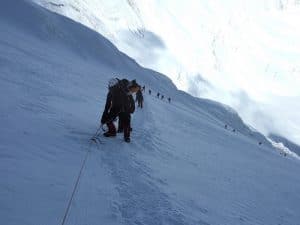 Martin had lost his sight due to a lack of oxygen and could see what he was doing.  It was a terrifying situation; if Martin fell he could pull us all off the mountain. The Sherpa kept shouting over my shoulder for Martin to stop and wait.  Due to the lack of oxygen at this altitude, we could not run over to help him quickly.
8,750m is a dangerous place, with a 3,000m drop to your right and an 2,500m drop to your left. This half metre wide ridge is one of the worst places for this to happen and Martin’s life was on the line.  As I got closer to him, he nearly stepped off the ridge when we had to place his foot back on the route. After maybe five minutes we managed to maneuver Martin around us and on his way back to the South Summit. Martin eventually regained his vision below the Balcony. I was glad he was on the way down, but scared to move back out onto the ridge. 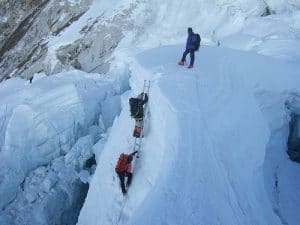 It was time to face my fears in a very real and dangerous way.  My fear almost got the better of me on numerous occasions. We moved forward towards the Hillary Step and I broke down. Afraid and nervous, I thought that if I go higher and lose my sight I might not make it back down. At this juncture, I began crying and found it hard to find a positive thought in my mind.

My Sherpa tried to keep me positive and focused on the fact that I was strong and could make the summit.  physically I was feeling good and that was enough to reset my mind and move forward. I continued on and climbed the Hillary Step, pushing myself the final thirty-five minutes to the summit.  The ground was easier to cover after the Hillary Step. When I saw the summit in the distance for the first time, that was enough to make that final push. 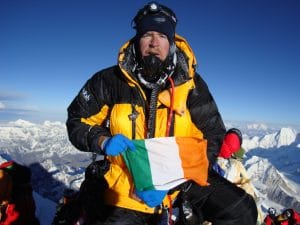 Standing on the Top of the World

I stepped up on the summit.  A twenty foot long ridge and two feet wide, I took out my Irish flag and logo’s and handed my video camera’s to the Sherpa.  I snapped a few pictures on the summit, before I was ready to get the hell out of there. I was mentally exhausted at this point and I knew that 80% off accidents happen on the way down. It was no time to stay alert. On the way up I was trying to remain calm. On the way down I was trying to get lower as quickly as possible. I can tell you it is hard work trying to slowly kept moving down, all the way back to Camp Four. 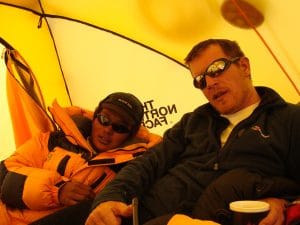 After eight hours up to the summit and four hours back down, I reached Camp Four. With a release of emotion, I embraced my Sherpa, embraced Graham and Martin and cried.  Happy to be alive, happy I had pushed myself past my fears and reached the top of the world. It was time to rest and refuel for the night before we would have to move two more days to get back to Everest Base Camp and then make the journey back home. This was my summit night on Mt. Everest. 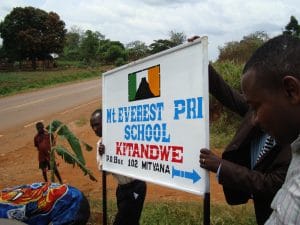 To watch the full story of Ian’s journey to the top of Mount Everest, you can purchase Ian’s Everest DVD Documentary – Everest, A Summit Calling’ by contacting ian@iantaylortrekking.com.  Ian now runs his own trekking company leading trips to Everest Base Camp, Kilimanjaro, Machu Picchu and more. If you would like more information on any of his trips on offer, feel free to get in touch.