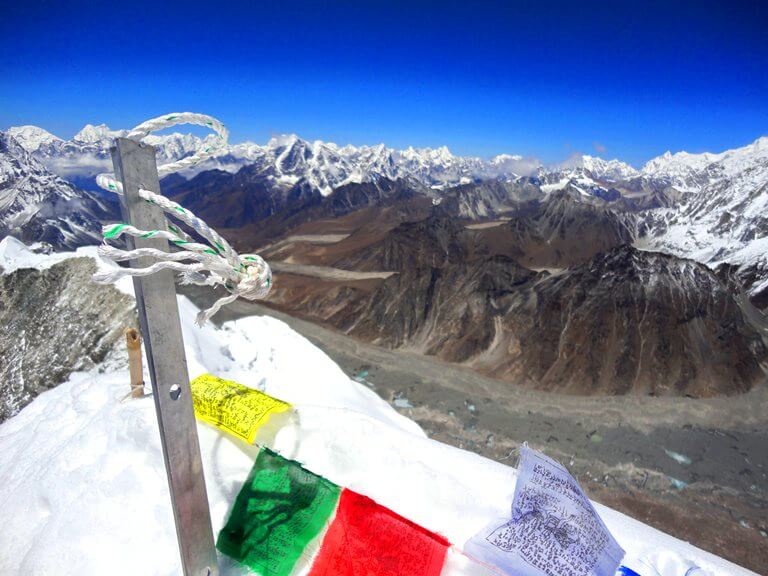 My name is Fiona Gallagher from Sligo, in Ireland. I joined and Ian Taylor Trekking trip to Everest Base Camp and Island Peak with a group of friends from the 15th October to 4th November 2022.  I hope the below information helps you as you prepare for your Island peak adventure.

The Journey is More Important

Firstly, Thank you for such an enjoyable trip to Nepal. It was a wonderful experience, made all the more so by the presence of your extremely professional staff of Sherpa guides.

It’s almost irrelevant that I didn’t get summit Island Peak! The other 19 days on the trail were what will stay in my memory – the journey is more important that the destination sometimes! We also really appreciated the ethics of Ian Taylor Trekking that you use yaks to transport luggage and not people. That was an important consideration for us. The walking pace was fantastic, and really helped with the acclimatization. And the weather was stunning! 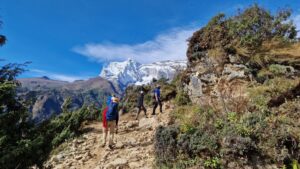 Yes, it is a tough trip, particularly with the high altitude, and the several cold nights at Island Peak Base camp in the tent. But we knew it would be tough, and the dossier makes that clear. I did find it tougher than the Annapurna Sanctuary trip in 2018, which we had done unsupported, but then it is much higher for a longer period of time. It’s all about being prepared, mentally and psychologically.

Technically, the system of rope rigging for ascending island Peak is very familiar to us, from both Mountain Rescue and from doing peaks in Scotland and the Alps. However, doing this at 6,000m is a huge challenge, as some of us found out. That is the crux of the expedition. We also seem to have been unfortunate with illness – not surprising given that people from all over the world were thrown together in a place where its is easy to pick up respiratory and enteric sickness, and we now all have less immunity thanks to almost 3 years of semi-isolation! 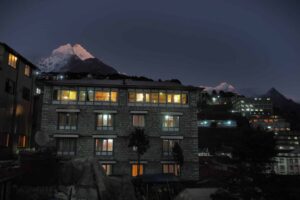 I have to highly compliment Ang Kami. He is extraordinary. Ang Kami made us all feel like we were getting such personal treatment. He is very eloquent, knowledgeable, professional and highly competent, and indeed a deeply spiritual man. I had many philosophical chats with him on the trail, which I so enjoyed, and for me that level of interaction with local people is one of the highlights to any trip to another country.

We were privileged to get to the Puja ceremony at Tengboche, a particularly significant moment for my husband and myself. (My husband’s father was the president of the German Buddhist Conference in the 1960s, and even visited Angor Wat with a Ringpoche in 1962! )

I also noticed that Ang Kami kept a fatherly eye on young Pemba, the yak boy, and that was great to see. Respect all around was the key takeaway from this wonderful trip.

The other lads in your team were fantastic! Nima Dawa is extremely competent with his rope work and mountaineering skills, as is Phurba. Tshering, in addition to being fantastic on the trail, was a great conversationist, and was so kind to me when I stayed at Island Peak Base camp for the night, when the others had gone to high camp. We had some great chats about farming in Ireland, and how I am old enough to remember the potatoes being put in a pit for the winter as well! I think all the Shepa’s were mesmerized that we (the Irish lads) were so fascinated with the stone-walled-fields, the potatoes and the huge cabbages! (I wonder why!)

There was a lot of chat about why we don’t grow barley anymore in Sligo! But these sort of conversations are what adds to the experience! And they also waited on us hand and foot at mealtimes! We weren’t quite sure how to cope with that, until we realized that was the protocol and then we relaxed! We so enjoyed all of their company, from start to finish, and we very sad and emotional to leave them at Lukla. Please pass on our regards and thanks to them all. They are superb.

Ang Kami coped so well with the two Heli-evacuations. I know he was concerned that the rest of us were waiting around too much while he organized the Heli for one of our companions, but we did not mind at all. We were very aware of the responsibility he had to the two clients who were quite ill, and we were anxious to give him all the support and help we could in that. I was very glad to see our friend getting out; I had been concerned about his chest for at least a day before. Absolutely the correct decision to evacuate him at Pheriche. The High-altitude clinic there is really in a good spot. 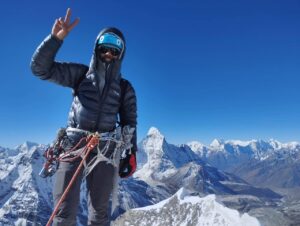 I have to highly complement Jesse on his professional handling of the trip and illness. He had his hands full on a couple of occasions.  He had a lot of patience and was extremely diligent.  He’s a very skilled guide, with a lot to offer any group, and he was good craic with the mad Irish!

High Altitude Can be Challenging

We all had a hard time with the altitude, so no matter how fit you are, you can’t really train for that. I was very conscious when staring out from Lukla, that I was below par; I had had a chest infection at the start of October, and was not fully recovered. I wasn’t sure if I’d even get to Namche at that stage! Thankfully I came to, and got the whole way to Island Peak Base Camp! Not being 100 percent also influenced my decision not to go to High Camp or Island Peak itself. Ang Kami kept a good eye on me on the first day, as did Jesse.

We did have a scary moment with another companion at Island Peak Base camp, the night of the ascent, when she was really unable to breathe, and was choked with mucus for several moments. But reassuring our friend and calming her down enough to breathe in and cough out very hard, worked, and once she managed to get the mucus up she was actually fine. Once again, Ang Kami had a back-up plan to get her down to Chuckung that night, by horse, if need be. (He’s amazing!). That was very reassuring to us all. But probably a lot of worry for Ang Kami. 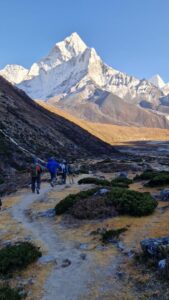 The Service in Kathmandu

The hotel in Kathmandu was fantastic, great pick, centrally located and we loved the roof-top terrace. We needed that sort of luxury after the trail. We also really enjoyed the meal out at the Thai restaurant on the last night. Top Class! Kay and Dawa worked very well to get us to and from the airport, and that keeps things really stress-free.

The Food and Accommodation

All the accommodation and food on the trail was perfectly good by Nepal standards. The Hotel in Namche was really excellent, – especially the electric blankets! The three nights in Namche is very, very helpful with acclimatization. Top marks there as well. We loved the lodge in Benkar, where the lady had met the Dali Lama. I think there was some issue with the lodge in Chukkung we were supposed to say in, but the lodge we eventually stayed at was grand, you just have to roll with the way things go on the trail sometimes. The priority was getting Dustin airlifted that day. 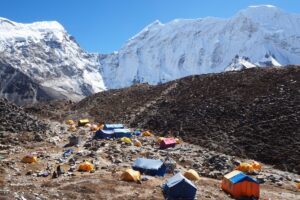 Gorak Shep is what it is… I think we stayed in the Snowland. The bedrooms were clean and not too cold considering where you are. There is not much you can do about the water issue or kitchens there, irrelevant of which lodge you use, so you just have to endure it for the night. The food was fine, considering the kitchens were a bit suspect!

The one issue that we all found hard, was the midnight journey to the small airfield at Ramechhap. Utterly outside ye’re control, I know. But it is really impossible to get up at midnight, (already jet lagged), drive for 5 hours on mountainous roads, then brave the chaos of Ramechhap airport, and then walk for several hours to Monjo or Benkar. That nearly broke me. I can only image it was a political decision by some local MP to get business to his area. It is not at all sustainable for 42,000 trekkers a year to go through Ramechhap.

Take a Helicopter from Kathmandu to Lukla

I think ITT will have to offer the option of taking a Helicopter from Kathmandu to Lukla, despite the price, or perhaps have another night in Lukla before the start of the walk. (I might add that I have spend a lot of time in rural Kenya, where the roads are terrible, and have driven many times across the eastern desert roads there, so I am really, really, used to rough roads! So if I am complaining about the road, it must have been extra rough on the body!! )

Weight Limits on the Flights to Lukla

We spent a lot of time stressing over the weigh limit on the plane to Lukla. The allowance for Island Peak is very tight, given the number of days on the trail. I know we managed in the end, with excess payments.

Have Local Currency for the Mountains

Perhaps you might advise trekkers to change more money in Namche, to have extra cash for buying Snicker bars and snacks in the villages up the trail. Although we had no trouble changing dollars at tiny shops in Dingboche! We needed more sweet-snacks than we thought.

Have the Correct Gear

I would put more Down clothing items on the equipment list! The several nights at Island Peak Base camp were very cold, and I was very glad I had down trousers and an expedition down jacket! I run very cold. One or two of our group could have done with more down. I noticed that the Coloradans were much more into Down Gear. Being Irish you always think rain, rather than cold! A cheap pair of down trousers picked up in Kathmandu will do the job. Check out our packing video.

Be Careful With Sleep Aids – Talk to Your Doctor

There was a bit of a toss up about sleeping tablets! I know all the issues surrounding them leaving people drowsy in the morning etc… but that depends on the type of tablet. If you are a woman the wrong side of menopause, the Ould Sleeping Tablet is the only thing that gets you knocked out! But rather than putting Ang Kami or Kay on the spot, it would be a good idea to get some advice from your doctor.  I used my normal dose of prescribed tablet, with no problems and had consulted my GPs (which is also a travel clinic), beforehand. 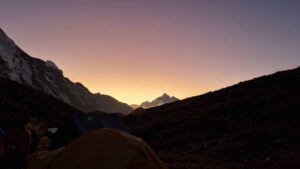 Dengue Fever is Now in Nepal

I know now there was a bit of an epidemic of Dengue fever in Nepal this autumn. It didn’t really appear on our radar until we heard Kay and others taking about it.  I am very familiar with Malaria and malarial issues from my Kenya days, but dengue is not really a problem there, despite the common vector of the mosquito. So I was a bit concerned, especially given the very late monsoon rains.

Not much more to add than that! By the way, we gave the 9 Berghaus ex Mountain Rescue jackets to Kay and Dawa, I hope you will find deserving homes for them. Please pass on our regards to your whole Nepal team, and we will drop a mail to Ang Kami and the lads for Christmas. Follow Ian Taylor Trekking on Instagram.