First of all, I have trekked and climbed with many companies and Ian Taylor Trekking were by far the best. The acclimatization, quality of the climbing Sherpa’s, western guide and over all support before and during the trip was first class.

Failure is Sometimes an Important Part of the Journey

I am writing about my journey to climb Mera and Island peaks in 2018.  The reason I am doing this is to help people understand the physical preparation needed to enjoy the journey.  I started this journey in 2012. I signed up to an Island Peak trip, thinking it was a straight forward trekking peak. It certainly is not. I had tried to climb Kilimanjaro and failed. I really want to get back at it, and be successful.  The company I had signed up with, told me ‘no problem you can do it’ . However, I found out that Island Peak is not a walk in the park, and I struggled to know who to listen too.

I was unsure where to turn for accurate information.  I felt I was fit, so I couldn’t understand why I was unsuccessful. It really got to me and wanted to figure out why. I found this blog post on training for Kilimanjaro and decided to pick up the phone to try and speak to Ian. Ian gave me an hour of his time, and I starting to understand where I was going wrong. My training and the itineraries I was picking were all wrong. After an hour speaking with Ian, I decided to go back to Kilimanjaro.

Training Advice and what I Didn’t Know

I am used to light training, and keeping fit. However, I learned that I was not mountain fit. When I tried to climb Kilimanjaro the first time, it was on a 6 day trip and what a stupid idea that was for me. Ian told me to join him climbing Kilimanjaro on a 8 day climb in August. Ian helped me map out an training plan and I totally changed my routine. After 2 months I could see a real different in my overall, strength, endurance and ability to carry weight in my backpack. I live at sea level and have no access to hills, so all my training was done in the gym. I made it to the summit of Kilimanjaro on my second attempt and what an amazing feeling. 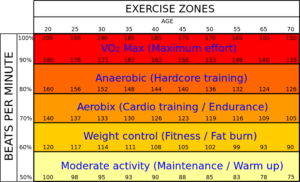 Use the Stair Master with Weight in your Backpack

I was predominantly using the stair master (rotating stairs) daily between 4 to 6 times a week. I started with no back pack. Ian’s advice was to focus on specific heart rates in the Aerobic / endurance zone and Anaerobic training zones. This does vary depending on a range of factors and your age. You should get a fitness test to access what heart rate zone is right for you. I was able to build up to carrying 25lbs in my back pack for 1 hour 30 minutes with heart rate of 135 (for me) and could do this 6 days a week. I was nervous going to Kilimanjaro, but when I completed the hike up to the Lava Tower and down to Baranco, I felt great. At that point I knew I could make the summit, and I did.

After being successful on Kilimanjaro, I really wanted to train harder and aim for Island Peak. It was amazing watching Ian’s Island Peak video’s, as they show case the reality of the climb. Ian shared a lot of pictures with me show casing the route up and down from high camp and I was surprised at how steep the climb would be. After reviewing all the information. I decided to aim bigger and go for Mera and Island Peaks. I knew I would have to train harder. It was a longer trip with technical challenges.

I went on a 5 day mountaineering course in the US, then 2 day course Scotland with Ian’s guides and then did some additional training in the Alps. I continued to abseil using a figure of 8 and worked on my technique. Also, I added more weight training, leg work and tried to use an additional 20 lbs of body weight. A few months into training and 3 months before the trip I was adding interval training and building the weight I was carrying. I was now stronger, fitter than I had ever been in my life. I was training 6 days a week by the end of my training. 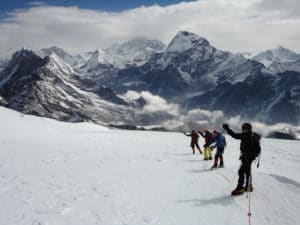 We Were in Great Hands

It was good to be back in Lukla after my previous experience that was terrible. On my previous trip we picked up a so called climbing guide in Dingbouche and I had minimal confidence in him. Ian’s western guide Chris was world class and the Climbing Sherpa’s were amazing, so knowable, helpful and experiences. The head guide had been up Everest, Island Peak over 100 times and the other guide had climbed Everest 9 times and K2 twice. We were in great hands.

The trek into Mera Peak was off the beaten trail. There are a lot of stairs up and down, so I knew my training prepared me well. I was really enjoying the trip and once we dropped into Khote the guides were very happy with my progress. We did some training in Tangnag and then more training in Khare. We had 3 nights of acclimatization which made a big difference, time to relax, do more technical training and prepare for the climb ahead. The whole team were well prepared and ready for the summit. The pace of the trip was slow and steady which made all the difference in my daily recovery. I was really excited to get moving.

The altitude was challenging, but we moved slowly up to Mera Peak Base Camp.  Then, the following day, we moved slowly up to Mera Peak High Camp at 19,000 feet. The altitude is draining at this elevation and the wind was blowing. I was feeling strong. When we left for the summit at 2am, I was ready. I actually couldn’t believe I was about to climb Mera Peak.

The first hour was gradual and straight forward but the terrain starts to get steeper and moving above 20,000 feet is challenging. I remembered the breathing techniques I used on Kilimanjaro and earlier on the trip and started to focus on these breathing techniques. 4 hours 30 minutes later, I was on the summit of Mera Peak. The views as the sun came up were truly amazing, way beyond my wildest dreams. I broke into tears and couldn’t believe I had really achieved this summit. 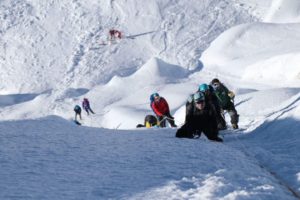 On to the Technical Parts of this Adventure

The trek through the Hinku Valley was really special. The views of Chamlang mountain above 23,000 feet followed us as we moved slowly towards Mount Everest, Island peak and the Amphulaptsa pass. I was living above 16,000 feet and felt very comfortable. It was cold at night which added mental pressure, but the guides and team keep it fun, enjoyable and interesting.  The view out across the lake from Amphulaptsa Base Camp camp was very special for me. I was a little nervous about the following morning and what was to come.

We woke at 5am, had breakfast, packed up our gear, and moved slowly up to the pass. It took about 3 hours. The first slope was scree, then we moved onto rock and ice, before roping up for the final section up across the glacier to the top of the pass. The initial drop down to the rappel was steep, however straight forward. All the porters had gone ahead of us, so we had our own ropes to drop down a steep section of the route. After that, we continued on the steep terrain and quickly moved past any potential rock fall areas.

It took another 3 hours to move down away from the pass. As we moved closer to Island Peak, you could see how steep it is from bottom to top. The views of the glacier are stunning and it was clear to see the route up the mountain. 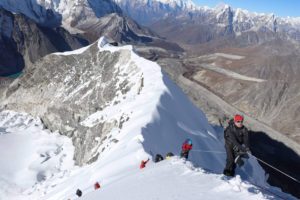 I had one final hurdle before moving to warmer climates and back down the main Everest trail. Talk started turning to down back down to the trail to Namche where you can find decent internet, beer and warm showers. But I had more business to attend to. I really wanted to climb Island Peak. I had only made it to 18,500 feet in the lower gully on my previous attempt. We had left from Island Peak Base Camp at midnight and I only managed to hike up 3 hours before I was finished. We had less acclimatization and the pace was so much faster on the previous trip. This time we moved slow and steady,  took less breaks than moving fast and stopping every 15 minutes.

We moved slowly up to through the steep rock and it only took our team 2 hours 30 minutes to reach crampon point. The glacier started coming into light at 5am and it was cold. The guides were working hard to get us moving as people were getting cold. We moved slowly up the glacier to a ladder crossing we also had a short ice wall to climb up before a bigger 20 foot crevasse crossing. It was slow going put we stayed away from the crowds. The climbing Sherpa crew went ahead to fix ropes on the head wall away from the main rope. It was again slow going across the glacier but the head wall became clear and present.

The Head wall was immense and steep. It was very hard work. Ian told me one thing about going up the head wall and that was to only take 3 steps or 3 movements at a time. Keeping my heart rate as low as possible was important. My instinct was to push hard to the summit, but if I wanted to reach the top and get back down safely, then keeping slow, controlled movements was key. It was very hard work. I witnessed people really struggling on the head wall with over 15 people on one fixed line. I saw people falling and way out of their depth. Like the way I was on my first trips.  But  this time, I reached my goal and stood on the summit of Island Peak! 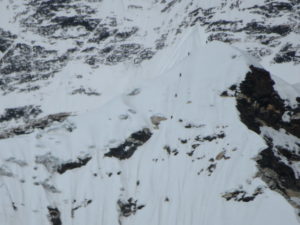 I have to thank the whole Ian Taylor Trekking team from Dawa, Kay, Kami, Karma, Jimmy and all who helped me realize my dreams. I have to give a very special thank you to Ian. Ian helped me understand the training needed, helped me climb Kilimanjaro, Mera and Island Peaks. It has been life changing for me. I realized I can achieve the summits of my dreams and the memories will last longer. It has been a long life journey to climb these peaks and has helped me stay active and live longer. I can not recommend Ian Taylor Trekking enough. Professional, quality and first class all the way. Thank you so much. Onto the next adventure!!