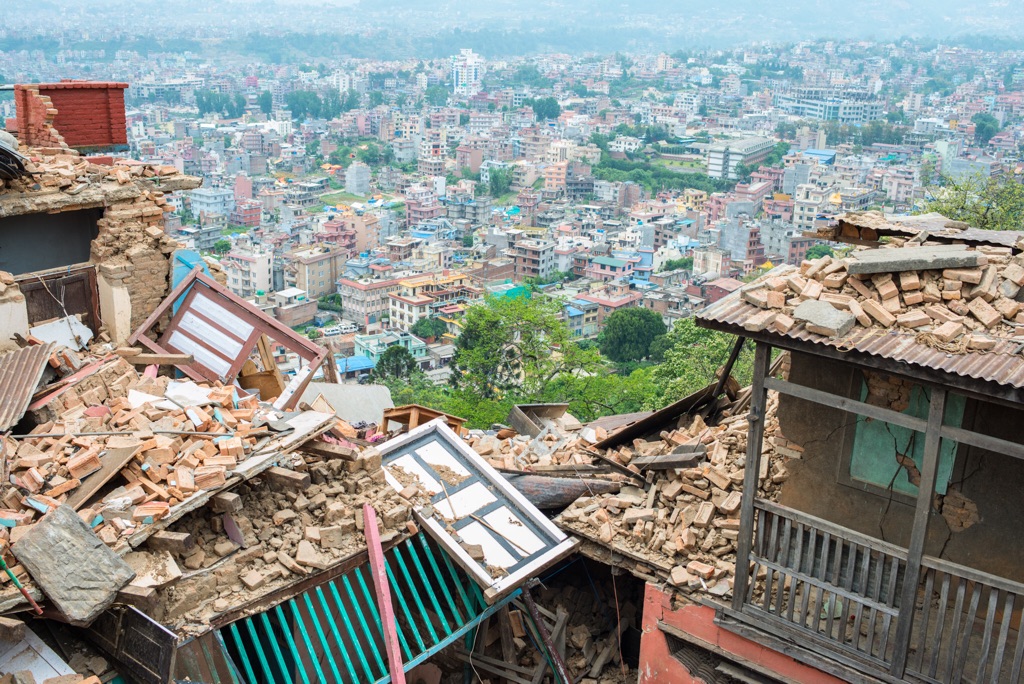 My Earthquake Experience in Kathmandu. On the 25th April 2015, I was sitting with our head trekking Dawa Sherpa. We were drinking coffee at the Nirvana Cafe in the ancient site of Swayambhunath. Most people know Swayambhunath as the monkey temple. Dawa and I were talking about earthquakes in particular, how one was over due in the region.  We had a week of work to do before we had a big groups arriving for their treks to Everest and Annapurna.

Tried After Three Weeks in the Mountains

That morning 25th April 2015, I couldn’t get out of bed. I had been leading groups to Everest Base Camp and Island Peak.  It was nice to have a morning off after 3 busy weeks in the mountains. 9 am came and it was time to get up.  I noticed Dawa was out watering his plants, so I went outside to join him. He had been up since 5am as he dropped our head climbing Sherpa, Ang Kami to the bus station.

Ang Kami was heading back to the village Goli where his wife and 3 year old baby lived. He was going for a week before he would head back to the Everest trail with us. Most of our staff come from the same village in the lower Khumbu region below Mount Everest. CLICK HERE to read article from the Irish Times. 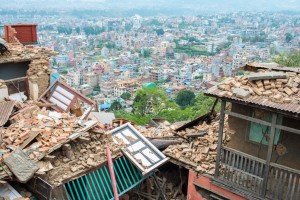 Dawa had made me coffee and two boiled eggs, offered me a shower and I said i’ll shower later.  He suggested we grab a coffee at the monkey temple. We could walk around and relax.  We jumped on his motor bike down the alley and off to Swayambhunath temple. It was just after 10 am when we walked up the steps and started walking around looking at different temples.  As we walked around, I remember it being very busy. I also remember Dawa jumping into action as someone jacket caught on fire from one of the candles.

We went through a small tunnel, that led to the Nirvana Cafe. The cafe had decent coffee in addition, to great views across Kathmandu.  We enjoyed our coffee and talked about a range of things including, earthquakes. We discussed an action plan for how we would act in case, of an earthquake. I remember talking about landslides on the trails in the Everest region and the risk to our groups. We would discuss this over the coming week in Kathmandu.

The Palace in Kathmandu

After our coffee we headed back to Thamel at 11:15 am. Dawa dropped me off at the hotel where everyone was staying and started to gather the troops. My plan was to bring some of the group to visit the royal palace and Durbar square. We were delayed leaving as we were waiting on Paul to come down to the lobby. Thank god he was late. If we had of left five minutes earlier, we would have definitely been buried under a couple of buildings. After the earthquake hit every street around the hotel was completely blocked off to access. 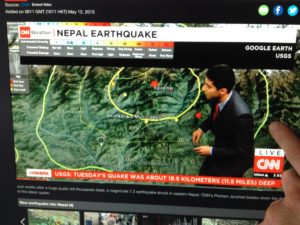 I was sitting in the lobby of the hotel at midday with Victor and Liza. At first, everything slowly started to move and then all of a sudden we could barely stand up straight. We managed to slowly make our way to open ground and struggled to even stand at times. There was a moment when I felt that was it for me. I though the hotel and all the buildings around us would come down. Hearing buildings coming down is a horrific experience. One hotel, behind our hotel collapsed and over 60 people died.

After the initial shock and rock of the earthquake and trying to understanding what just happened.  My concern turned to the rest of our teams in the mountains and friend in different parts of Kathmandu.  I could hear screaming in all directions and wanted to help. A few of us ran to see if we could help and soon realized we were in more risk as there were aftershocks. As we moved back to safety a building where we were standing collapsed. We moved back to an open area we had been in.  We were in no position to help at that point.

Our focus turned to our friends. Ronan and Magda were out on the street shopping and sightseeing and hoping they were not in harms way. I was also thinking about our staff and Sherpa friends who were shattered around Kathmandu and further a field. There was surprisingly very little damage to our hotel.  Eventually I ventured out in search of Dawa and his son Sonam.  I could see a lot more damage and fallen building within a short distance of the hotel. I worried for my safety as I walked over building which had come down. 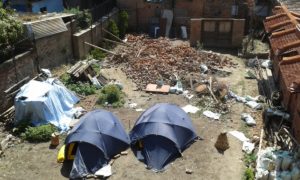 Looking for Dawa and Sonam Sherpa

There was no sign of Dawa or Sonam in the area. After about 5 minutes of looking around, there was big aftershock.  Hundreds of people started running in all directions.  After walking around the area for 45 minutes at this time, I decided to make my way back to the hotel. I wanted to make sure Ronan and Magda arrived back at the hotel safely. We waited on open ground at the hotel. It was a relief to get a call from Ronan saying they were safe.  Four hours after the initial earthquake they arrived back in the hotel. To my relief, one hour later Dawa showed up at the hotel.

That night we had WiFi, so I spoke to my wife about what was happening.  A couple of newspapers called me from the UK and Ireland and wanted to know more.  I explained what I had seen and what was happening on the ground in Kathmandu. It was unclear at this time, what the response would be and how quickly it would come. The first four days after the earthquake were bad. There was no water, food or electricity. The airport was full of people trying to leave the country. I will never forget the three hours reminder as the ground rocked with tremors. I was still trying to get everyone out of the country as quickly as possible.  We had a team on Mera peak at the time and it was challenging trying to get information from them.

By Wednesday 29th April, things were starting to move again.  We still had no running water, or electricity but we needed to help where we could. All our clients were back in Kathmandu and preparing to go home. Dawa and I decided to go out and help people. So for three days be would do that each day.  We saw some horrific scenes and people in need. Bodies were still on the back streets of Thamel, the tourist district of Kathmandu.  We visited people in large camps desperate for water, food and basic necessities.

Once we had given all our time, resources and money,  I starting thinking about going home.  It was time to find a way to support Dawa’s village and our staff. Dawa’s village of Goli had not withstood the earthquake. Word came through that the village of Goli below Pikey peak in the Everest region was in ruin.  We now have to think of a way to help these people in this remote village. Goli is close to the Everest region which has been so good to us over the years.

We had been helping the village, sending up stoves over the last couple of years but now it was time to help on a larger scale.  I will never forget as my plane took off from Kathmandu at 9 pm Friday the 1st May 2015.  Dawa left Kathmandu for Goli the following Saturday morning on a long 10 hour bus ride. Dawa brought food, tents, water, and supplies. He didn’t know what he would find in his village.

We have yet to hear about how the people are but I am waiting for video and pictures of the damage. We will now raise money for Dawa’s village, hopefully bringing a little hope to the people in his village. Where so many good people have come from.

Finally, Click Here and find our more about Goli village and our support trek to Pikey Peak. My earthquake experience in Kathmandu left me with the clear understanding that people need help.  I had a responsibility to raise awareness and especially, help in a remote part of Nepal. PLEASE DONATE to the ongoing support of Goli Village.