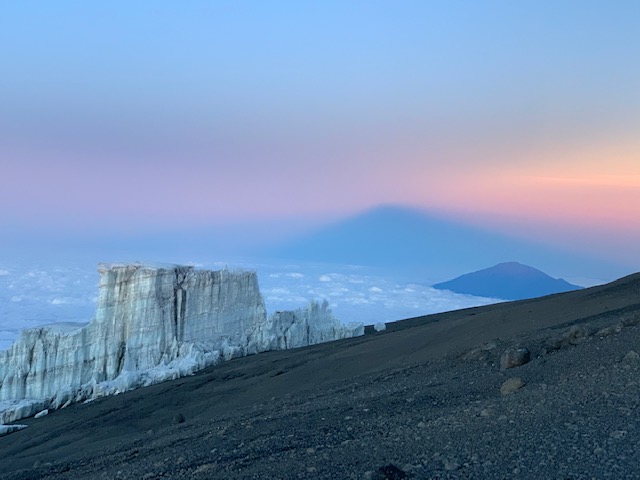 Between one thing and another I had let my fitness levels drop. Now I know that you need to be fully prepared for the Kilimanjaro experience.  You need to be ready for the final strenuous ascent and descent on the mountain. I also learned that you need as much acclimatization as possible. 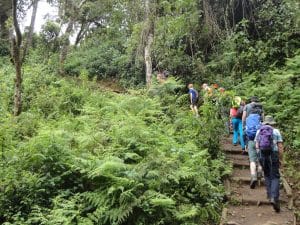 On my first attempt I went with a local company on a 6 day Machame route climb. I made it to Baranco Camp 12,992 feet. Earlier in the day I had attempted to reach 15,000 feet at the Lava Tower. I got extremely sick that day and barely made it into camp safely.

The guide didn’t help me that much, he had no oxygen and was no real support. The guides were always going too fast.  Over half of our group of 8 people got sick and I felt on my own most of the day.  I fought hard to make sure did not fall on the way into camp. I had a headache,  I was dizzy and I was vomiting most of the way back to the camp.

We had moved fast up to 14,000 feet on day 3. We were not encouraged to drink water, the food bags were not sufficient and the support was poor to say the least. I remember trying to sleep that night in Baranco but my heart rate was too high and just lay there all night as I could hear other team members vomiting. 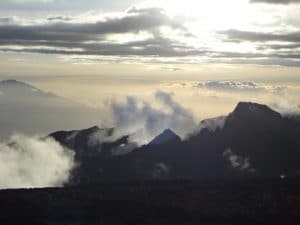 At this stage, I knew I would not make the summit, and I got very upset. No one had come to check on me and not happy with the team of guides. I spoke my mind but they did not seem to care. They just said come have breakfast and we leave in 2 hours.

I was not sure about going higher again and the Baranco wall looked daunting from where I was standing. All I wanted was to get off the mountain. I had a bad headache and was exhausted. It took a few hours to get sorted. The mood was somber. Most of the team was sick from the altitude.  They were tired and not really enjoying the experience. I asked our guide how long it would take to get to the next camp and he told me that we were going to Barafu, which is over 15,000 feet, and it would take 7 hours.  6 of the team members said they needed to go down, so that is what we did.

We descended through the steep and not advisable Umbwe route back down the mountain. I began to feel much better once we got back below 9,000.  However, the steep route was hard. It took all day to make it back to the gate and back to Moshi for the night. I slept hard and had mixed emotions about my Kilimanjaro experience. It took me months to analyze my experience and was frustrated that I didn’t reach my goal. 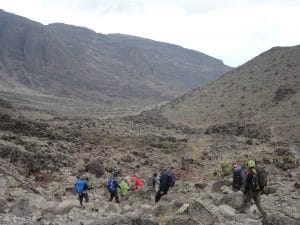 A year later and around the same time as I had attempted to climb Kilimanjaro I saw a friends post on Facebook. She had climbed Kilimanjaro with Ian Taylor Trekking. I decided to reach out to her and she said do it with Ian’s team and the 8 day Lemosho route.

In stark contrast my experience with Ian Taylor Trekking and his team was totally different. Yes, the second time round it cost more, but If I had of picked Ian’s company from the start I would not have needed to come back again. Ian’s training advice was so different than the previous advice. His altitude advice, training advice and experience were priceless. 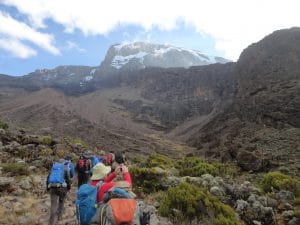 My Training for Kilimanjaro

Ian explained the best times to go to Kilimanjaro and how I should approach my training. I decided to climb 6 months later.  My focus shifted to training with a pack back on and over time built up to carrying 25 lbs which I had never done before. I was training 5 days a week and my leg strength and endurance had improved dramatically. This training alone has changed my life. Since the climb I am fitter and stronger and more capable. This has been a transformation for me.

It was good to be back in Tanzania. I left upset and demoralized from the previous experience but felt stronger and more capable this time. 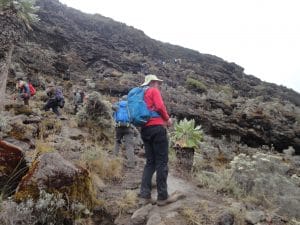 I also had more time on the mountain with less elevation gains than my previous experience. The staff were so different and we had at least 15 more staff. We had more guides, with safety equipment and oxygen. We had security, servers and our own toilets and the set up was 100% better.

The speed we walked at, the advice on hydration was so different. We walked a lot slower which kept heart rates more manageable and I was not as fatigued as the previous trip. I was feeling so much better. I was taking Diamox, which Ian encouraged me to do. The staff was checking our heart rates and oxygen saturation, morning and night, which gave reassurance that the team were all acclimatizing well. 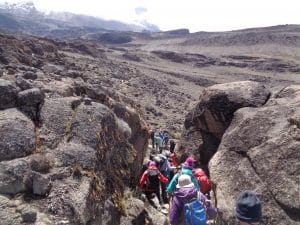 We had people from Ireland, Canada, Australia, England, France and the US on our team, most of them had trekked with Ian’s team before and had such an amazing experience.

The tents, equipment and whole set up on the mountain was amazing. Chef Ede and his team were incredible and the food was unbelievable. We had salads, fresh fruit, fresh food as they had 2 additional drops of food. We had amazing soup each meal and were treated like kings and queens. 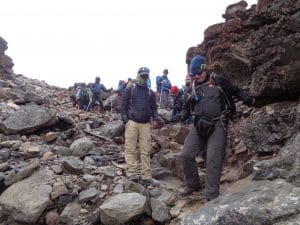 The Food on Kilimanjaro

I cannot say enough about the food and the staff they were the best. I had almost forgotten we were there to climb the mountain and if I didn’t, I’m not sure I would have cared, the experience was so great.

We had a short day followed by a longer day, then a short day before I was back to attempting the Lava Tower at 15,091 feet.  I had only reached 14,764 feet the last time before getting extremely sick so I was a little nervous. We did walk slower, I felt fresher and we had an additional night camping on the Shira Plateau, which is amazing, before moving higher. 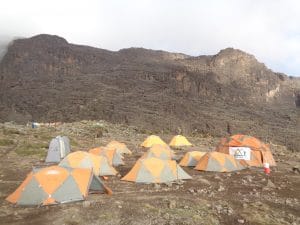 Climbing Kilimanjaro for the Second Time

I was stronger than before and because we were moving slower I felt excited to go again. It was a great feeling to reach Lava Tower this time. When I arrived there, I cried a little, as this was the first big hurdle for me. Amani, Shabani and Omar then served us a hot lunch and delicious soup in the mess tent. I could see people outside eating out of a plastic bag in the cold and glad to get getting proper nutritious food into me.

The whole team made it, nobody was sick. There were a few headaches and some people didn’t feel like eating much but this would be normal at 15,000 feet above sea level. 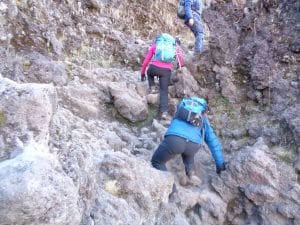 We all arrived into Baranco camp at 3:30pm to the team singing and dancing and I felt amazing. I had not remembered the ground cell trees or the amazing beauty of this special valley. It was very exciting to be back in Baranco camp. I felt horrible the last time I was here. This time I felt great, no dizziness, vomiting or headache.

Now the climb was on. The whole team were excited about climbing the Baranco wall. I was nervous as we approached the bottom but there is nothing to worry about. There are only a couple of sections where you have to down climb and most of the wall was walking. Steeper walking but really manageable. 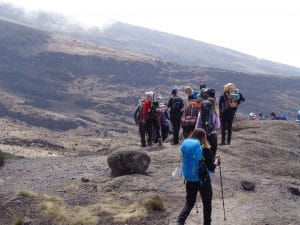 I was really enjoying the trip now as we now had another night at Karanga camp at 13,156 feet before going higher on the mountain. On my first attempt, the plan was to go from Baranco camp to Barafu camp in one day. Then go to the summit that night. How stupid was that.  We had no idea what we were getting ourselves in for.  No doubt it can be done, but only 2 people out of 8 in my group made it to the summit on the last miserable trip.

As we moved to high camp at 15,255 feet, I knew I would be reaching new heights. We were moving slowly, taking our time and putting ourselves into high camp as easy as possible. Moses, Saide and Athumani were leading the pace and it was perfect. We arrived into Barafu camp at 11:30am and gave us 2 hours to relax, set up our tent and then have a full Dinner at 1:30pm we would then have time to rest and prepare for the summit attempt. I took some Ibuprofen and fell asleep and woke at 10:30pm to start hydrating. 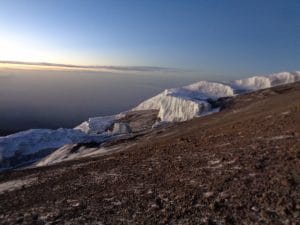 Preparing for the Summit Night

I was nervous, excited and ready for the top. I was feeling strong and ready for to reach my goal. One thing I would say is follow Ian’s advice on doing one longer session per week. When you are climbing to the summit you will walk for an hour and then rest for 5 minutes and continue this process for 7 hours. You really need hours of endurance training in preparation for this summit ascent and decent. The descent was harder on the body as we dropped down just over 9,000 feet in one day.

The hardest part of the summit night on Kilimanjaro was the last 2 hours to the crater rim at Stella Point. We had been trekking for 4 hours and mentally it became more challenging. It was getting colder and I was tired so I had to focus on breathing and stepping. Having put in the endurance training is really important for this long day out on the mountain. 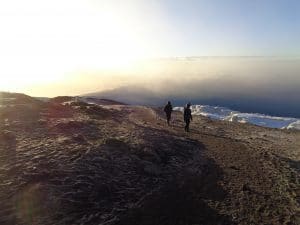 It was so nice to see light appear on the horizon. The team lead by Athumani were all making great progress up to Stella point. It was hard work trying to stay positive but we were all doing great and our guides were very encouraging.

It was really hard with the lack of sleep but the deep breathing techniques and chance to stand on the top of Mount Kilimanjaro was driving me forward. I was feeling good and this was it. We walked slowly towards the summit and it seemed to take forever but eventually we rounded a corner and I could see the famous sign at the top of the mountain. 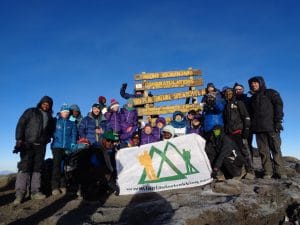 We did it, we all reached the summit of Mount Kilimanjaro. It was a great moment especially after my last sole destroying attempt to reach the summit. The descent was tough. It was hot on the way down, but by 10.30am we finally reached the camp again after having stood on the top at 6:45am. It was a great team achievement. Ian’s team were amazing and the team sang up back into camp. It was a truly amazing experience and I was glad to make it to the lower camp. The terrain below the high camp was challenging but we were all glad to make it to lower oxygen and get some much needed sleep. I think I slept for 11 hours that night. 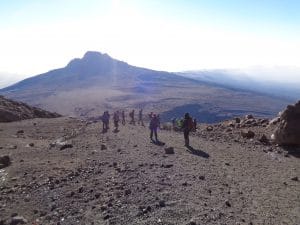 The Best Company on Kilimanjaro

We had breakfast and then presented tips and the team sang and danced for 45 minutes, what a send off. Everyone walked down the mountain excited, revived and so happy with our overall experience. We could not have done it with out Ian’s team. Each and every one of them gave their all so we could reach the top. It was the training and especially the acclimatization that made all the difference this second time around. I highly recommend Ian Taylor Trekking for your Kilimanjaro trekking adventure. READ SOME REVIEWS.