Island peak is beautiful, fairly accessible and is totally worth doing if you want to experience climbing in the Himalayas. The mountain is far from a mere trekking peak and requires good preparation and professional guides.  Do not underestimate the risks and dangers that Island Peak presents.

This climb wasn’t the hardest thing I’ve ever done but it was certainly the most intense. We started out at around 2 am from High Camp at 5,500 meters. The first section is a scramble up a steep rocky crag. It was dark, cold and the rock was covered with snow and ice. Looking over the edge you could see nothing but pitch black and it was pretty scary going.  Knowing that any little slip could send you down into this blackness. 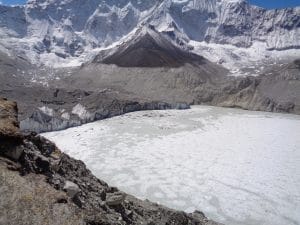 We arrived at crampon point, just before daybreak. Crampon point is an exposed section that leads up to the glacier sitting at the top of the mountain. As the name suggests, you stop briefly and put your crampons and harnesses on before continuing up the glacier. The moment you stop though your body freezes because of the cold and the icy winds!

I had only worn crampons a couple of times before and recommend practicing putting on them over and over again while in base camp.  One of the guides had to help me put on my crampons on while I warmed up my hands.  At this point I was already fairly tired and stressed.  I’d be even more tired if we started from Base Camp. 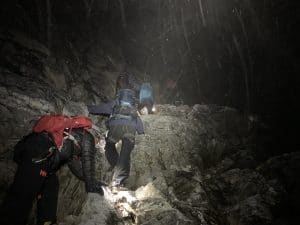 We moved up onto the glacier roped together. The glacier covers the top section of Island Peak with some deep crevasses. The ice forms bizarre hills and caves with deep, seemingly bottomless gaps in between. The glacier is always on the move and new cracks may open at any time, even under your feet! 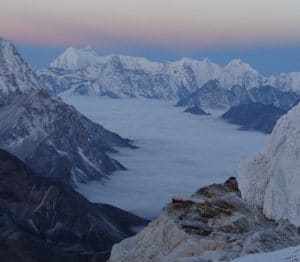 We had to cross one of the crevasses over a steel ladder. It’s only three steps across, but looking down you couldn’t even see the bottom, so those 3 steps were pretty intense! Directly above the crevasse was a nearly vertical ice wall, about 10 meters high. I was Jumaring up this wall when, one of my crampons slipped and came dangling off my foot. I remember nearly panicking at this stage, but luckily our guide Ian Taylor was directly behind me. He told me to stay put and he managed to attach the crampon back to my boot. 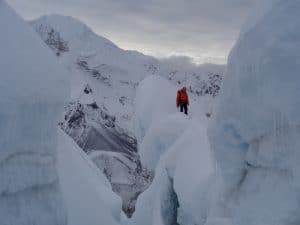 After crossing all the crevasses, ice hills and exposed ridges on the glacier.  We were now facing the famous Island Peak Head wall. The final section to the summit is a huge mass of rock and ice about 150 meters high.  We had to climb this steep gradient to reach the summit.

The wall starts at about a 45 degree angle.  Then straightens up to 60+ degrees, but at times it felt like it was totally vertical. Our guides fixed ropes leading up to the top and a big queue of climbers. A total of about 30 people were climbing around us on the day. It looked like too many people lining up to use the already fixed lines. Some had already started to go down, just as others were climbing up the wall.

The sheer number of climbers going in both directions makes the use of fixed ropes highly dangerous. While we were climbing close to the already fixed rope some anchors came out and people fell. One person was injured. That is why if you climb Island Peak make sure your guide has their own ropes.  Do not rely on the fixed ropes that have been on the mountain for months and who knows, maybe years! 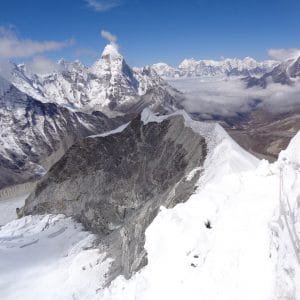 Jumaring up the Head Wall

Jumaring up the head wall is hard work even for experienced mountaineers.  The climb is very tough on the legs especially, after the strenuous climb over the rock and glacier earlier on. I think it took us about an hour to finish this section of the climb. Some of our team members barely made it and were saying afterwards that the Head wall was the hardest thing they’d ever done. I was absolutely exhausted upon reaching the top of the head wall.  However, a few years before I had to push myself harder when I ran and finished my first marathon without adequate preparation. After scaling the Head wall there is only one thing left to do.  You have to cross a narrow ridge with sheer drops of at 1,000 meters on either side and then you’re at the summit. 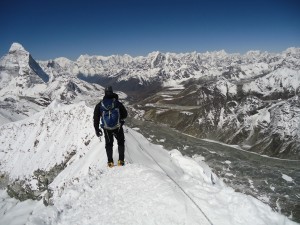 Standing on the Summit

The summit of Island Peak is very small. It is not much wider than the top of a dinner table. It’s exhilarating to stand there and admire the bird’s eye views of the surroundings. Time stood still as you look around at the mountains, glaciers and huge Nuptse wall hiding the summit of Mount Everest. I remember looking down on the frozen Imja lake down below. I knew there was still a long way to go.  You really feel what it must be like standing on top of Everest, K2 and the other top peaks.  I can now appreciate just how tough and dangerous reaching those heights must be. CLICK HERE and read another blog post on climbing Island peak with us. 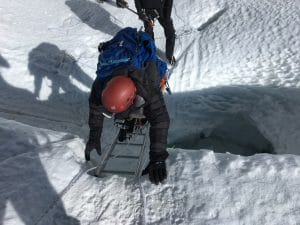 Here is some advice and learning from my trip to Island Peak. I have to say I underestimated the trip and would have done things a little different if I was returning. Listen to Ian’s advice before the trip and you need to come with right physical and technical training.

1). Island Peak is Not a “Trekking Peak”

Climbing it is a real challenge (plenty of experienced mountaineers would agree) and should not be underestimated. Prepare well for the trip and do as much winter training as you can, including crampons, abseiling, ropes, glaciers etc. These things can be pretty daunting if you do them for the first time in freezing temperatures at 6000 meters! Every mistake here can lead to injury or worse. Our guide Ian Taylor trained us at Base Camp before summit day, and this helped tremendously. I also did a 2-day winter skills training in Scotland a couple of months before the trip. And still, I wish I had more preparation.

2). Buy Your own Mountaineering Boots

You should have your own mountaineering boots.  Get used to wearing them at home, while breaking them in well before the trip. I hired mine in Chuckhung, the village before Island Peak Base Camp.  The boots turned out to be terrible!  At this point, I was really worried I’d lose my toes to frostbite.  My feet were absolutely frozen during the whole climb.  This upped my anxiety and effected my energy levels. In the end I didn’t lose my toes, but I got some nasty blisters. I lost a toenail and lost feeling in three of the toes after just a day of climbing in those rented boots.  My feet took a month to recover. I had been told to buy my own mountaineering boots before the trip. I wish I had of taken that advice.

I can totally recommend Ian Taylor and the Sherpa’s who work with him. Our head climbing Sherpa, the legend that is Ang Kami who’s been on top of Island Peak over 150 times. Ang Kami fixed ropes and managed safety to perfection. He has summited Mount Everest and Ama Dablam, among many other mountains.

Guides normally tell you to bring as little weight as possible.  I had only one Nalgene bottle with me. If I was doing Island Peak again I think I would bring 2 or 3 liters. Remember if you want it you have to carry it.