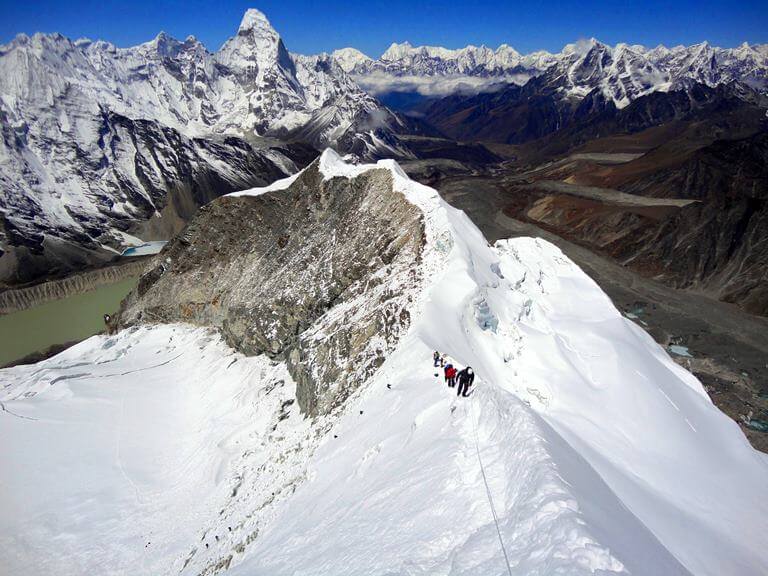 Education Will Make a Difference

There is no denying the harsh reality of high-altitude mountaineering. An introspective journey where physical strength and mental fortitude collide.  The feeling of overcoming adversity is where those who climb find true joy and perspective. In October 2021, I will be chasing a childhood dream of testing my mind and body in the high Himalayas.  Our target is climbing Mera Peak and Island Peak in one amazing adventure to raise funds for the Apa Sherpa Foundation.  Along the way, we hope to give back to the very Sherpa people making this dream a reality. ‘Without education, we have no choice.” – Apa Sherpa.

Education is so Important

Most young adults in America can likely recall the proverbial tall-tales of their parents’ treacherous walks to school, all too often recounted with a grin and received with an eye-roll. Whether it was barefoot, in the snow, hours long, uphill both ways, or some combination thereof, it is pretty widely agreed upon that these nostalgic tales are rarely anything more than generational hyperbole. Now imagine, if only for a minute, a world where these stories are anything but anecdotal exaggerations. Imagine a world where this is a widespread reality; even in the twenty-first century. Imagine being able to do something about it from the comfort of your home. 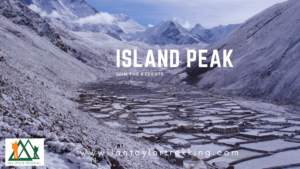 Nestled amongst the highest mountain range in the world, the Khumbu region of Nepal is home to not only some of the highest peaks on earth including Mount Everest, but also a sprawling population of mountain-dwelling people, the Sherpa People, with a culture as ancient and vibrant as the Himalaya itself.

Many Americans likely picture the same generic examples of the “Sherpa”… someone carrying bags up a hill, adorn in rustic wool and fur jackets and snugly winter hats. It is this form of commercialized appropriation that has brought the word Sherpa to the fingertips of the average American consumer.

Help a Child Get Ahead

What many American’s don’t understand, however, are the often-difficult lives of those growing up in such a remote mountain region. Without consistent access to formal education, many Sherpa children do not have the opportunity to chase academic and career dreams. With limited employment opportunities, many resort to working in the demanding and dangerous mountaineering industry as a way of sustaining their families. In an effort to improve this bleak reality, the Apa Sherpa Foundation has been fighting since 2010 to brighten the futures of Sherpa children living in the Khumbu region. 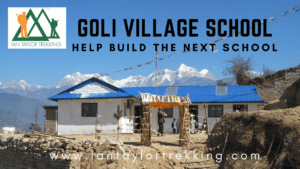 Founded by Apa Sherpa, an Everest-Region native and a twenty one time summiteer of Mount Everest, the foundation’s mission is to empower those young individuals in overcoming adversity. Funding schools, supporting teacher salaries, and organizing hot lunch programs for students throughout the Khumbu region of Nepal are just a few ways the foundation gives back to Apa’s roots. In order to understand an educational crisis on the other side of the world and ways we can help, we must first understand a culture beyond that of a magazine advertisement.

“The true beauty of Nepal isn’t the mountains, but the people who live in their
shadow” – Apa Sherpa While the term Sherpa has become synonymous with everything from porters to jackets, the Sherpa is in fact an ethnic group, not a job title. The Sherpa
people initially migrated from the high desert of Tibet into the Khumbu Valley and
surrounding mountainous regions of the Nepalese Himalayas, bringing with them
Buddhism to a predominantly Hindu region.

Their culture, time tested in one of the harshest and remote regions of the world, adheres strongly to pillars of faith, humility, responsibility, and family. A stoic reverence for their deities, which they believe are embodied by the surrounding mountains, is woven throughout the very fabric of their communities and daily lives. 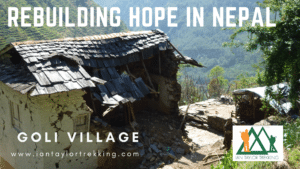 Tourism is Important to our Community

Due to the remote nature of the region, the Sherpa people generally rely on a
local economy, sustained mainly by agriculture. While there have been recent
advancements in infrastructure throughout the Khumbu region, brought on mainly
by the mountain tourism industry, many villages remain remote and only accessible
via narrow mountain foot-paths. Recent commercialization of the mountaineering
industry has brought a river of money to the region, which has created opportunity
for occasionally lucrative careers for the Sherpa people; the catch, however, is that
the work is labor intensive and often extremely dangerous seasonal employment.

The very nature of Himalayan mountaineering creates a transient stream of work
opportunity, and brings to light the old adage of “feast or famine”. Many men, young
and old, may find themselves carrying heavy loads up Mount Everest by spring; only to
retire to farming or construction by the summer monsoon season and the harsh
winter. During peak expedition season, the demand placed on the high-altitude
porter and guide industry is astounding.

The commercialization of Mount Everest has recently been the topic of significant media attention, mostly due to the inconceivable number of climbers on the South Col (Nepal side) climbing route. With a higher density of climbers comes increased risk on the mountains. This has created a media frenzy of Western news coverage of accidents; one which often fails to detail the deaths of Sherpa working on the mountain, or their heroic efforts to rescue clients.

Being one of the highest paying sub-sections of the tourism industry, many
young Sherpa find themselves enticed into expedition support in hopes of earning
salaries high above the regional average, often 4- to 8-times the average income.
Their experience can range from young teenagers with minimal time spent on high
slopes, to seasoned climbers with immense technical knowledge of the routes and
systems in place to guide clients to safety.

Because the Sherpa people live at high- altitude, their bodies are naturally adapted to the lower availability of oxygen, making them perfect candidates for both porters (carrying heavy loads of supplies), and climbing guides who fix routes and lead clients to the summit and back. On Everest alone, many Sherpa guides and porters must traverse the most dangerous part of the climb, the Khumbu Icefall, over 30 times a season; this compared to the average client who makes roughly 3 rotations through the same tedious route. 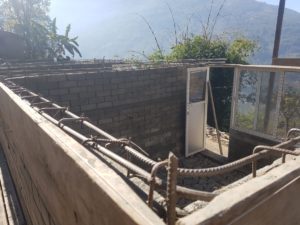 To put things into perspective, since the Himalayan Database began keeping records in
1950, there have been 294 deaths of for-hire Sherpa working in the mountains (1).
It is important to note that the overall death rate of for-hire Sherpa is not necessarily linear over time, as a very recent uptick in mountaineering popularity has placed an extreme demand on Sherpa for-hire, resulting in a staggering increase in recent deaths. On Everest alone, between 2000 and 2018, there were 48 Sherpa climbers killed while working on the mountain; a statistic that is astounding for a civilian career in recreation and tourism.

One of the primary reasons the world is seeing an increase of Sherpa working
in alpine tourism is the reality that there is extremely limited opportunities for
employment otherwise. Educational opportunities remain sparse in the remote
reaches of the Himalayas, and the ones that do exist often require young students to
walk hours through difficult terrain and harsh weather. Aside from the physical
proximity of the students to schools, education logistics such as teacher salaries,
education materials, and nutrition prove difficult to sustain. 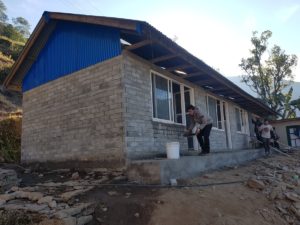 Unlike in the United States, teachers in rural Nepal don’t have formal representation for fair wages, conditions, and benefits. Teachers may earn wages, however many work as
volunteers, making it difficult to support consistent education in the region. Many
students may go an entire school day without eating, or may only have a small snack
that they carried with during their long commute by foot.

These barriers to access frequently result in the commoditization of education, enjoyed only by those determined to go (when they can), or those whose families can afford to send them to formal schools in Kathmandu or other more developed areas of Nepal.

We Need Children to Finish Their Schooling

Even when children are able to attend schools, it is not uncommon to see students
dropping out once they reach an age where they can cash-in on the mountain
industry in an attempt to sustain their families. The nature of the situation places
young adults, and sometimes teenagers, into a rigorous ultimatum of ethics versus
responsibility to family; one which often hangs their own lives in the balance.

“Because we believe that education opens the door to a world of opportunities, the Apa Sherpa Foundation asks for your kindness. All donations made will go to the lunch program and the salary of teachers that feed the minds of the children in the Everest region.” – Apa Sherpa Foundation

Here is where you can do something about it! The Apa Sherpa Foundation is
a 501(c)(3) non-profit. The foundation funds schools, teacher salaries, and hot lunch programs through the generosity of donations. In conjunction with the expedition, and in an effort to give back to the Sherpa people who are helping me realize my own dreams. I am proud to have partnered with the Apa Sherpa Foundation in an attempt to raise money through individual donations and charitable corporate sponsorship.

A small donation today goes a long way for children hoping to chase dreams and escape a life of adversity. For approximately $1.50 USD, the Apa Sherpa Foundation can ensure a child a hot, nutritious lunch. The cost to pay teachers is $17 per day, equating to roughly $5.60 per teacher per school day at the Thame Primary School.

For the cost of a morning coffee and fast food lunch, you can ensure a child has one full day of education with a paid teacher and a hot meal. Businesses interested in getting involved are encouraged to contact me so we can discuss ways to advertise your logo in exchange for a donation to the foundation. Together, we can create a sustainable education system in the Everest region! Follow us on Instagram.