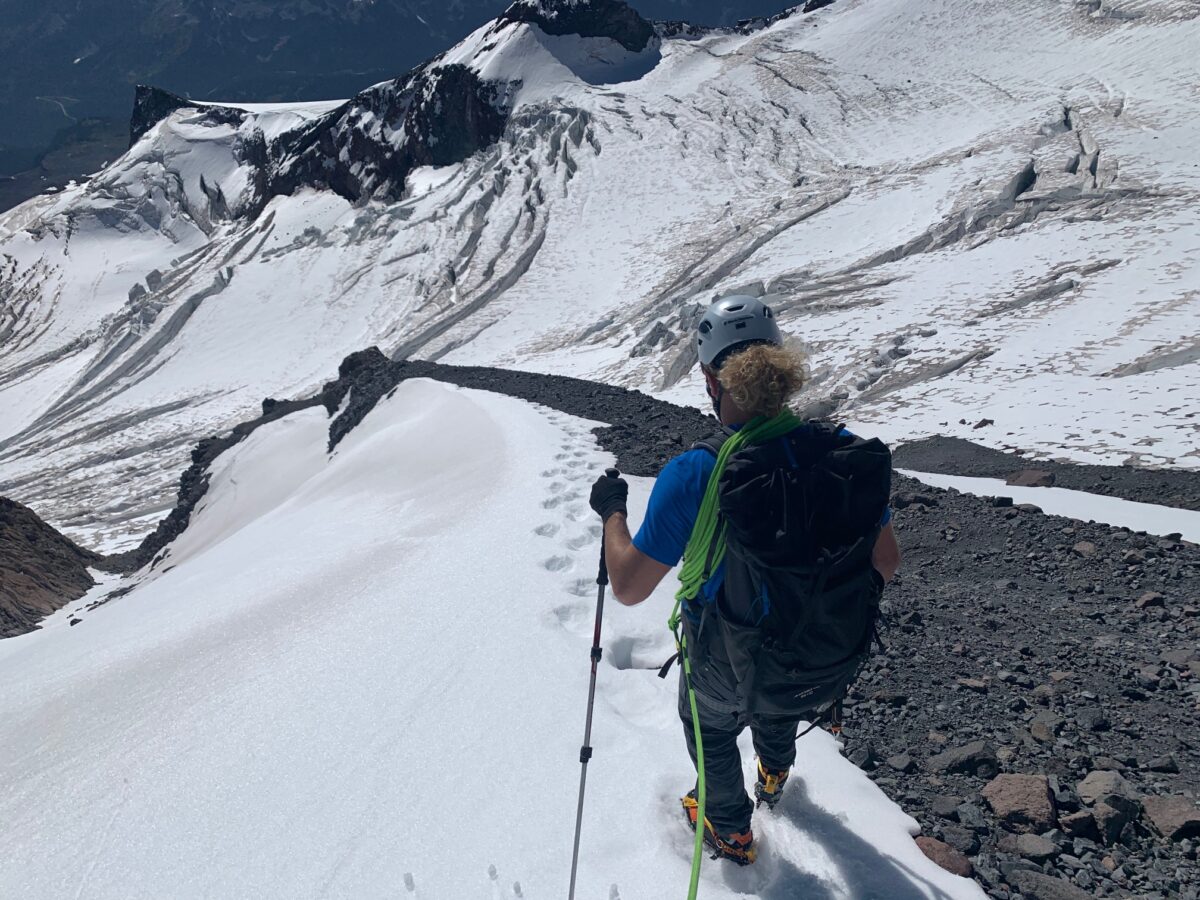 Home / Latest News / How Long Does It Take To Climb Mount Rainier?

It’s massive. It’s gnarly. It’s scary, in a good way. But guess what? Anyone can climb it, and it will forever change your life.

Well, almost anyone can climb it. If your days are mostly spent glued to a sofa eating Cheerios out of a cake-mix bowl,  while gorging on Netflix, then mountain climbing might not be the best activity for you. No offense.

In other words, you need adequate fitness levels to climb Mount Rainier at an absolute minimum. Sadly, given that half of us can’t touch our toes without looking and sounding like we are wrestling a silverback gorilla, some people would be ill-advised to take up mountain climbing suddenly. Again, no offense.

But the good news is that Mount Rainer is accessible to those of you without even a shred of climbing experience. You may want to gain some experience and we have courses available in Colorado.

Armed with a climbing permit, you can strive for the summit of this breathtaking, awe-inspiring, and majestic mountain known as Tahoma by native Americans and officially climb Rainier. Bragging rights, much? 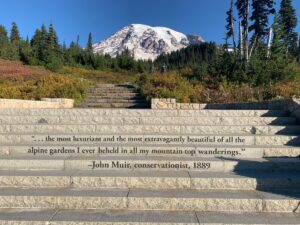 Seriously? Can anyone climb It?

Yes. The main risk associated with mountain climbing, in general, is the technical aspect of the sport, and nothing else, really.

Well, maybe the altitude. Oh, and the avalanches. Thinking about it, the abyss-hiding crevices can be something of a problem, as can the occasional house-sized falling boulders. Did I mention the potential cerebral edemas? No, don’t you dare google it.

But apart from those trivial hurdles, mountain climbing is primarily about technical ability. Mount Rainier does not offer anything in the way of highly challenging technical ability (or house-sized falling boulders, or edemas, for that matter), so anyone can tackle it. However, we strongly recommend that those without climbing experience do so with guided climbs. More on that later.

Providing you are of reasonable fitness and have some winter trekking gear, you are free to climb this majestic beauty under your own steam. A climbing permit is required at the 10,000 foot point, but they are available to everyone, with no special restrictions. 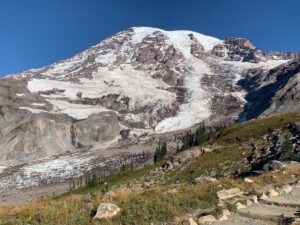 Because it’s not golf. It’s not fishing. And it certainly isn’t cricket.

Those are all enjoyable, decent activities, and there is nothing wrong with them. We have one or two passionate golfers and fishermen on our team of professional guides, and they love it.

But golf will not enrich your life in the same exhilarating, spirit-enhancing way that climbing a mountain will enrich it. No experience is even remotely comparable. A hole-in-one, maybe, but even that is a close call.

Unfortunately, the reward is almost impossible to explain to someone who hasn’t done it. So, when we say that a Rainier climb – or any other mountain – is one of the most incredible, extraordinary experiences you are ever likely to try, I hope you can take out word for it. Failing that, you can seek counsel with our customer reviews. There are tons of them.

We have seen accountants and lawyers summit amazing Mera Peak. Construction workers and architects who have accomplished stunning Island Peak. Housewives and retirees who have conquered the invigorating Cotapaxi. They all have that same look of unbound and almost unearthly joy on completion.

Only a mountain gives you that unique feeling of jubilation. It is almost up there with the birth of a first child. Honestly, it really is such a special, rare feeling.

Mountain climbing is inaccessible to many people, but many of our trips are climbable even without experience. You need to be in relatively good health, that’s all. Oh, and use a guide. Again, more on that later.

Mountain climbing easily warrants a bucket list entry. People of all ages and experience levels climb mountains, and rarely will you hear of anyone who regretted doing so. Unbridled joy is the default emotion for those who can boast of a successful summit.

The question should be much less why climb Mount Rainier and way more why on Earth wouldn’t you. 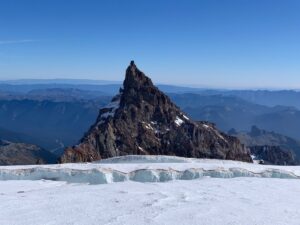 What’s Involved In The Climb?

The mountain is located within the breathtaking Mount Rainier National Park, which itself is a thing to behold as one of the most beautiful parts of the country. We could quite happily write an entire article about the park alone, but that’s not why you are here, so we won’t.

Again, this is a very accessible mountain, so getting there and starting the climb is easy enough. Located on the other side of Seattle, the area has plenty of lodging, restaurants, campgrounds, and national park service ranger stations, so planning the trip is easy enough.

How Long Does It Take?

It depends on various factors, such as season, extreme weather conditions, and experience levels. You can also try different routes, each with different summit times.

We can offer approximates for each route, and they are similar to the national park service estimates. Let’s take a look, along with a more detailed view of each one, starting with the most popular. 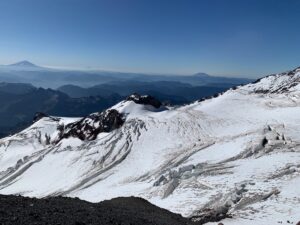 Heading from the south and climbing from the southeast side of Mount Rainier, the Disappointment Cleaver/Ingraham Glacier Route is the most popular route, appreciated by novices and experts in equal measure.

Favored mainly in the summer months, this route is the least challenging summit attempt of all four routes, with three-quarters of all climbers selecting this route to tackle the mountain each year.

Disappointment cleaver comes with a 50% summit rate, arguably one of North America’s highest success rates. As a result, this route often gets quite crowded, especially during peak season when even the most inexperienced climbers and trekkers head to the mountain.

The route commences at the Paradise Ranger Station. It proceeds along an excellent solid trail to Columbia Crest, through a glaciated peak, including Cowlitz, Muir Snowfield, Ingraham, and finally, Emmons Glaciers.

Disappointment Cleaver is classed as the most straightforward route of them all, but it is no cakewalk: Navigation skills are required, along with cramponing, belaying skills, and sometimes an ice axe. Again, it is possible to attempt without much experience, but you would have to be quite reckless to do so.

Before the real climbing begins, there is a 6-8 hour snowy trek to Camp Muir. Once there, you can rent mountain huts, or tents, if you need them. From Camp Muir, ascent commences to the Cowlitz Glacier through various challenges such as crevasses and snow climbing (once again, it is no cakewalk) which leads you to Cathedral Gap, perched 3,300 meters up the mountain.

Heading over to Ingraham Glacier, you will arrive at Ingraham Flats camp, a further 100 meters above.

The final section from Camp Muir takes another 5-8 hours, giving you a total ascent time of around 11-16 hours. 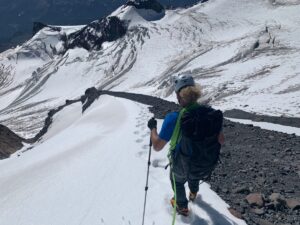 You should aim to arrive early to secure a decent campsite. This is tent only, there is a hut, but it is for emergency use only.

From Schurman, head along a snowy downslope to The Corridor at 12,000 ft. This route isn’t too popular with novices owing to the next stage in the climb – a crevasse-laden stretch with various route divergencies – which proceeds towards Columbia Crest or Liberty Cap crater rim.

The summit is then on the opposite side of the crater rim. To descend, follow the same route down.

The actual trek to Camp Curtis is again around 6-8 hours. From camp to summit, another 5-8 hours, which gives you a total ascent time, bottom to summit and down again, of 11-16 hours.

First, a trek to The Turtle snowfield through the Nisqually Moraine Trail before ascending to Wilson Glacier at 9,500 feet.

From Turtle Snowfield, ascend to a westward chimney at around 11,000 ft. Then, a shortish rappel to the edge of a gully. From there, head westward through ramps a couple of hundred feet to the bottom of an ice cliff.

From there, you ascend to Point Success and head for the summit. Alternatively, you can ascend to Wapowety Cleaver and follow Nisqually to the summit.

Descend by heading over to the Disappointment Cleaver route.

Total trekking time here is around 10-12 hours. Actual climbing time is somewhere around 5-10, with another 4-5 hours to the trailhead.

Best avoided in poor weather, this route starts with a hike to Glacier Basin before ascending to St. Elmo Pass and descending again to Winthrop Glacier and finding camp just over Curtis Ridge.

From there, ascend the Carbon Glacier to Liberty Ridge. Cross the ridge crest and ascend to the high camp at Thumb Rock. A tricky ice gully ascent to the ridge crest. Snow slopes here are pretty steep, all the way to the crest of Black Pyramid, followed by an ascent to where the ridge merges with Liberty Cap Glacier.

Climb through ice cliffs, head west over crevasses and a bergschrund to the summit at Liberty Cap. Descend the Emmons Glacier route down to Camp Schurman, then continue down to Glacier Basin

Do I Need a Guide?

With a guide, climbing Mount Rainier is life-changing and exhilarating. Without a guide, it can be life-endangering and terrifying if you lack experience. If you fall into the latter category, get a guide.

And don’t just employ the services of any old guide. Hire someone certified. Recruiting an old college buddy into the adventure because you vaguely recall he owns a North Face jacket is not the most sensible move you will ever make. Hire a professional who has summited Everest. That’s a much better idea.

What Are You Waiting For?

We have seen the expressions of thousands of people who have joined our guided claims and tours, and every single one of them has experienced overwhelming joy.

The vast majority of people who visit our website have the urge to do something amazing, life-enriching, and memorable, like climbing a mountain. Most of them don’t, and that’s a pity.

The intention is there, but it is something they merely think about committing to, year after year, until it is simply too late.

Life-changing experiences are not born out of ‘thinking about it.’ They are born out of spontaneity. So on behalf of Ian and his thousands of life-enriched, seriously happy, summit-boasting clients, we would say this:

If you can feel mountain adventure calling, join one of our mountaineering training courses in Colorado or check out our various tours. It will be one of the best decisions you ever make.